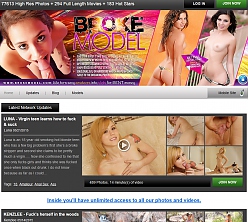 There are some professionals here at the supposedly all-amateur Broke Model, Jodi Taylor, Dani Jensen, Whitney Westgate, Alex Chance, and London Lynn among them. The complete amateurs, of which there are many, are often very attractive, too, and give the site its decidedly authentic amateur feel.

A new Broke Model arrives here every Thursday and gives members new video and photo content to drool over, each kind of image hitting high resolutions and providing lots of detail. Videos stream and download at 1080p and lower, while photo galleries reach 1600px online and zipped.

Cons:
Clearly made from an overused and outdated template, Broke Model's design lacks flair and finesse. Navigation tools are pretty basic and easy to use, though the streaming and downloadable video options are tucked into an obscure drop-down text menu, which is kinda odd. At least this is all in line with the amateur nature of the site, though, right?

Conclusion:
With such a wide range of women and sexual scenarios available, Broke Model's appeal should be extremely far reaching. Stuck as it is in the genuine amateur niche, it'll be a bit tough to convince those used to professional calibre suckers and fuckers opting instead for these less experienced, less exceptional, and occasionally unattractive women. That said, many of the amateur performers prove themselves very capable, sexually speaking, as they open their mouths, pussies, asses, and moralities and take on new adventures in exchange for cash. The videos and photos produced by Broke Model look fairly good in 1080p and 1600px peaks, respectively, though photo galleries could stand a higher-res option. The bonuses, too, are very satisfying, in some cases much more so than Broke Model itself. While I can't rush to recommend this site to everyone, those with a real penchant for everyday women in desperate situations may lap up every morsel this site has to offer. (Or, if not, hit the bonus sites!)