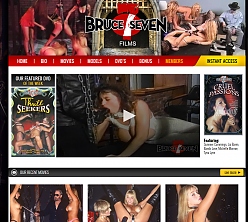 Video stream at 640x480 and 480x360 resolutions. Sure, these aren’t HD but given the era they were produced in, you can’t expect them to be. Photo galleries carry that signature 80s brightness to them and actually come through surprisingly well for decades-old still shots.

Although we shouldn’t expect any truly new Bruce Seven material to arrive, this site updates its archives every week with another dose of whipping, prodding, poking, spreading, and sex. There’s already close to 140 scenes and their corresponding galleries online, as well as a discount now allowing you to slip inside for just $19.95 a month.

Many DVDs are added to this online archive with the date of production or release field left empty. Everything here is clearly many, many years old but it would be helpful (and logical as fuck) for Bruce Seven’s storied career to be detailed this way. In fact, really any further info on each title would be a godsend. All members get is the title itself, the VHS or DVD box cover, and the cast.

Considering how old this content is, it makes sense that the site layout and design would be similarly outdated. Unfortunately, we still have to use this site today and its archaic design, awkward navigation, and barely-there functionality get in the way of fluid, flowing browsing. It’s unlikely to be redesigned anytime soon, though.