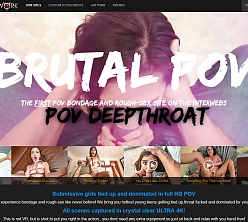 Pros:
Brutal POV offers an exclusive collection of original takedown movies. The women may start their scenes as mouthy girlfriends only to be taught a lesson in shutting up. Thieving employees are pounded into a full confession and some girls even egg their daddies on with dirty talk and filthy requests for deeper, harder, rougher fucking.

Ashley Adams, Vienna Black, Riley Star, Brandi Bae, Vina Sky and Kitty Carrera are all featured as the subjects of Brutal POV’s first-person takedowns. The women do a great job of looking just fearful enough without it getting truly scary, submitting to their powerful partner’s verbal and physical commands. Ropes, tape, collars, and chokeholds are all featured heavily.

In Ultra-HD and HD videos hitting 4K and 1080p, the very POV-heavy shooting pack a hell of a punch! As the women stare into the camera lens and beg for a lighter touch, it feels quite like they’re addressing you, the viewer. It’s too late to turn back, though, and with such rich visuals on board, you wouldn’t want to anyway.

New epic tales of sexual brutality arrive here at Brutal POV about twice a month. The modest collection may not exactly be overflowing with smut but what it does hold is of a very high quality both visually and sexually. All Brutal POV subscribers receive free access to the mammoth Fetish Network and its plethora of online perversions at no extra cost.

Cons:
Holding just 15 scenes at writing and updating on a slippery less-than-fortnightly schedule, Brutal POV isn’t yet large enough to command huge audiences on its own. Without the included network access many would be reluctant to join the ranks of members. So dense and fruitful is Fetish Network - especially it’s most recent sites, Brutal POV’s contemporaries - that it should erase all concerns about the size of Brutal POV.

What’s in a title? Apparently not that much. Brutal POV may utilize the awesomely immersive POV camera angle for much of its shooting but it also moves off axis and starts to loose its footing. Shooting off the man’s shoulders can offer sexy sideways glances from rear-pounded babes but it also brings more of the guy into the picture. Sticking with full POV, no exceptions, would increase Brutal POV’s power.

You can’t win ‘em all and, folks, if you’re into brutal sex, power plays, and domination, sometimes the male cast member living out your fantasies is, in fact, the scummy, criminally abusive element you should be glad you never turned into. Some of Brutal POV’s male cast pushes the boundaries of respect and consent in real life, making their work here not only more vivid but more than a little disturbing.

Many newer Fetish Network sites appear for only a short time, adding a handful of scenes before shuffling off this mortal Internet coil so the creators can get to work on something fresh. It’s highly likely that Brutal POV will see only four or five updates in the next six months, and possibly even fewer after that.

Conclusion:
Banking on the idea that more and more men are eager to tear their most frustrating female companions down a peg or two, by force if necessary, Brutal POV restrains and dominates its female stars, throwing them to the proverbial lions for a righteous pounding from a powerful guy. Rendered in seriously amazing 4K videos that bring you incredibly detailed views of, say, a single tear forming during a deep throat fucking that runs down to the quivering lips rearing back for an unwanted facial splattering. This is one stunning looking site, folks, and like many new Fetish Network endeavors it has an unfortunately uncertain future. Maybe there’ll be a strong barrage of updates to keep this new venture alive but if it’s at all like Latina Patrol, Shamed Sluts, or Internet Creeper, Brutal POV may cease updating after only twenty scenes or so. Whatever the future of this insane sexual takedown site, the network that hosts it is an endlessly exciting fetish extravaganza well worth a long, hard look if you’re at all into decadent power plays and debauched sex. Brutal POV may be brutal at times, but it’s also surprisingly sweet!