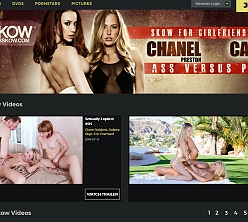 Overview:
Some directors burst onto the scene with their very first film, creating a pop culture sensation, taking home more trophies than a champion thoroughbred, and embarking on a career as bright as their debut. Others, however, toil away for years in an attempt to refine and perfect their style and approach, their very directorial voice. BSkow isn't the household name that Axel Braun now approaches, nor is he as controversial a figure as the Nacho Vidals and Rocco Siffredis of this world. BSkow is just a guy with a generous gift and what appears to be a sensible head for business, and, after an already captivating career shooting for Girlfriends Films such movies as Sexually Explicit 9: Breast Exam, Southern Hospitality, and Down the Rabbit Hole, now has his very own video emporium with which to entertain and arouse porn lovers of all stripes. Charging $29.95 for monthly access, BSkow brings his subscribers a healthy dose of deviancy in high-end narrative scenes and features, all of them serving up something hot, heavy, and hardcore. From MILFs seducing their stepsons and pool boys to teenage wannabes auditioning for a role and young girls submitting fully to their daddies, BSkow isn't afraid of busting taboos, as long as he's inspiring erections and lady-boners the world over. BSkow's site offers "twisted fantasies" for "erotic, taboo, and psychological" elements heavily at play in regular weekly updates to this exclusive and very promising site.

Streaming at 540p peaks and downloading at twice the size, 1080p, BSkow's videos hit both ends of the HD spectrum. Buffering quickly and playing smoothly form your browser, streams are a great way to confirm your selection before committing to a download. Photo galleries bring highly evocative stills to your screen in 1920px resolutions.

BSkow has been a productive fella for some time. His self-titled site now holds 39 DVD titles, the 165 scenes they contain, and the 134 photo galleries accompanying them, all laid out and arrange neatly on this exclusive site. A BSkow membership is now even more affordable, discounted by Mr. Pink's down to $14.95.

Cons:
BSkow's devotion to high-end photography is commendable (if a little shaky) but it's a big disappointment to find video streams limited to just 540p resolutions, a far cry from the site's largest, most detailed videos, the 1080p downloads. Providing viewers with downloads and streams in all sizes would be a smart move.

No bonus sites have been included in BSkow members' access packages. This is especially disappointing because it appears BSkow is tightly connected to Girlfriends Films, an all-female site that would make an excellent bonus in this context. Some of Skow's Girlfriends Films work appears on this site also, but it's in the minority.

When dealing with characters, plot, motivation, and performed conflict, you're bound to hit a few snags along the way. At BSkow, its a few poor acting jobs (and the editing that can't disguise it) that brings the whole production down a touch. Skow's performers generally do a good job and deliver their lines with confidence and style, though that can't be said of every one.

Conclusion:
Home to more than 150 scenes, all of them HD, all of them directed (or overseen) by BSkow, the man's self-named site has plenty to offer anyone into hetero and all-female porn that places a heavy emphasis on mood, atmosphere, tension, chemistry, and, believe it or not, plot and character! Movies devoted to step-cest, casting auditions turned fuck tryouts, and period pieces that see Carter Cruise all gussied up in Wild West "whorehouse" garmentry then gangbanged all coexist under Skow's marquee. The 1080p HD video streams and downloads bring you very strong images, rarely lacking in depth or realistic touches like obscuring shadows or foreground intrusions. Some stilted performances can bring down the movie that hosts them, but for the most part BSkow manages to coax not only convincing performances from his cast, but thrilling, flaming hot sex, both of which combine to great, unique effect.