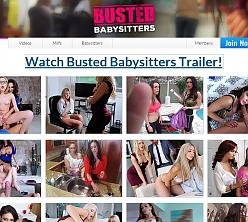 Whether it's the father or her boyfriend, each babysitter is after some dick and won't be pleased 'til she gets it. Couples let their young employee learn a few things only a seasoned pair can pull of and the girls seem to relish all the attention. Boyfriends are often shocked silent and act as stiff rods for their girlfriends and the likes of Diamond Foxx, Veronica Avluv, Jessica Jaymes, Julia Ann, and Anikka Albrite to tussle over.

All Mr. Pink's readers wanting to indulge some babysitter-boning fantasies can do so at the discounted rate of $19.95-a-month! Here's the catch, you have to sign up through Mr. Pink's Mofos discount tour link instead of the standard Bust Babysitters tour.

Cons:
Home to only 13 scenes, Busted Babysitters is by no means large and the original plan was to set this as a mini-series of updates and not a full site. After launching in February and updating through March, the episodes stopped coming so Busted Babysitters is looking, well, kind of busted.

Mofos recently shifted to a streaming-only service, removing video download options for all members but those who joined prior to November 2014. Anyone with a Busted Babysitters membership will have joined after this date and they, along with you if you sign up now, will be stuck without any video download options at all.

Some performers, especially some younger ones, can't manage to deliver lines convincingly. Veronica Avluv may come off as a seasoned pro-slut who's rehearsed her vampy lines in front of the mirror, but at least when she makes a command you stand at strict attention. Some of the younger girls can't feign surprise, embarrassment, trepidation, or shyness very plausibly.

Conclusion:
Having only launched at the start of this year, Busted Babysitters was seemingly doing fairly well for itself, but definitely showing room for improvements. The most important element, the performers, is near-flawless with Madelyn Monroe, Daisy Haze, and Marsha May throwing their fresh bodies at the guys (either boyfriends or husband/father/employees) and branching out into sapphic sex, too. The dominance of Veronica Avluv, Chanel Preston, Julia Ann, Kendra Lust, and the other featured mature marvels, brings the already hot scenarios to boiling point and allows for lots of great verbal interplay and straight-down-the-camera eye-contact that really seals the deal. The basic Mofos network is available to all Busted Babysitter members who enjoy 1080p HD video streams on this site and most others. Busted Babysitters is almost hot enough to make me want an ankle-biter of my own but with updates no longer planned for this series, I'd say it's time to find a new babysitter.