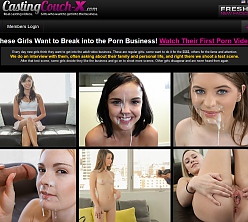 Shot in 4K formats and here streaming in 1080p HD and downloading in an awesome 2160p UHD resolution, Casting Couch X is certainly doing something very right in its AV department. Videos stream smoothly and UHD downloads are crisp and loaded with rich detail. Photo galleries provide still shots at 1500px and make a nice accompaniment to the main attraction: the sordid audition sex.

Cons:
You might assume Casting Couch X would have trouble shooting a new girl every day, what with so many young sluts headed to LA with cock, coke, and cash in mind. Unfortunately, this site isn’t especially frequent with updates and only adds one new scene every two weeks. Sure, this isn’t a disaster like so other sites’ schedules, but it’s just not frequent enough for heavy users.

Shooting a Casting Couch X scene should come early in a new performer’s career. This site usually gets this timing right but can occasionally come to women a bit too late. Autumn Falls, a featured performer in April 2019, had already become an online sensation after debuting a few months earlier.

Network access is teased on almost every page yet remains behind a paywall for all but premium Casting Couch X members. This means such sites as Holed, Lubed, Exotic4K, Passion HD, Pure Mature, SpyFam, and POVD are little more than a drool-inducing annoyance made of unwanted banner ads and scene previews.