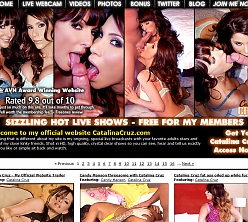 Overview:
Short of running a commercial boat trip between San Pedro and Santa Catalina Island, Ms. Catalina Cruz couldn't have a more appropriate name. Her exotic looks stem, surprisingly enough, from her Slovenian heritage and not "Hispanic" or "Latina" as often claimed, making Cruz a curious pornographic entity. This busty raven-haired vixen also steers well clear of most mainstream adult productions, making rare appearances in feature DVDs and predominantly shooting for this, her official website. Catalina Cruz's self-titled online home brings her and her fans closer than ever. She broadcasts live from her home studio, indulges in hardcore hetero and les-leaning sex as well as solo endeavors that show her body reacting strongly to her own handiwork. Live webcam shows and personal diary and blog entries from Catalina herself makes this site not only the only place on the 'net to find Catalina's best work, but the best path to learning even more about this award-winning web starlet. Getting inside Catalina Cruz will set you back $24.99 per month, but membership also includes complete Fantasy Girl Pass access, so why not dig in and see how Ms. Cruz runs things.

There's quite a lot of content available here, both live web performances and studio shoots. Catalina has also given us access to a hot mess of candid pics well worth a look. There's currently 507 videos and 490 image galleries online and new content is still being added.

A month-long membership to Catalina Cruz's official site now costs only $17.99. Thankfully only the price was slashed; you still get full, free access to another 19 sites, all of them presented by Fantasy Girl Pass and focusing on Sienna West, Austin Kincaid, Gianna Michaels, Brooke Banner, and Sasha Grey.

Cons:
None of the video content hosted by Catalina Cruz or Fantasy Girl Pass is offered in High Definition resolutions. Most videos are stuck at 640x480 pixels and look quite drab, the SD source draining instead of amplifying what could be colorful scenes. Not only is there no HD, none of the videos can be downloaded (except for licensed third-party Video of the Week, which stopped arriving in 2008).

Speaking of inactivity, no legitimate video updates (recorded webcam shows don't count) have been made so far this year, leaving members to make do with new photo galleries and live content. Supplemental updates have also slowed or stopped, with the Diary entries stuck in late 2009 and the members forum has been dead for about a year. Video distribution is also a problem, with 376 recorded cam shows and only 48 boy/girl scenes.

Hit the Live Webcam menu option and you won't find Catalina, only a link to Sweet Fantasy Cams and a suggestion to watch her scheduled shows there. Other women keep the live shows going, but they're not even remotely related to Catalina Cruz. Members are also told to add Catalina to Skype for free five-minute chats and shows, but I did that and she hasn't been online in a month.

Conclusion:
Like the other Fantasy Girl Pass websites, Catalina Cruz's official online home is rife with problems and seems like it gave up a few years back. Bonus content like the Diary and Message Boards haven't seen any action in years, and with the focus firmly on Catalina's solo photo shoots and live webcam broadcasts, those wanting to see recent hardcore work from this Slovenian-American vixen will be disappointed. The lack of High Definition video is also quite a let down, as is the fact that, although network access is included for free for all of Cruz's members, most Fantasy Girl Pass sites are similarly, frustratingly behind the times. What would kick Catalina Cruz and her site into a higher plane of porno existence? How about a fresh and simple redesign, less licensed and cross-posted content, and, most of all, a far more active lead performer. You know, just for starters.