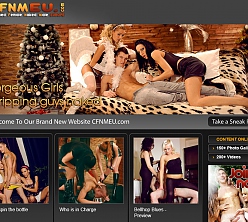 Although the women are usually the focus of a CFNM site, CFNM EU has been shot for a more sexually flexible audience. With the same team behind Str8 Hell and William Higgins operating this comparably young endeavor, you can expect plenty of hunky man-meat to be shot with an adoring eye.

CFNM EU's photos have not been marred by the presence of watermarks, giving you clear, unfettered views of everything in the frame. Video content is offered in High Definition WMV and MP4 formats at both 720p and 1080p resolutions and can be either streamed online or download, as can the zipped galleries.

Videos are added to CFNM EU on a weekly schedule, hardcore galleries every two days, and model galleries whenever new guys debut. There's already a strong archive here and this schedule only strengthens it further, adding plenty to the 312 videos and nearly 200 galleries every month.

Cons:
Although photo galleries offer an option to change the size of the thumbnails appearing on gallery pages from small to medium to large, the photos themselves remain at a disappointing peak resolution of 1000px. Most older content sits even lower at just 900x600 pixels.

Most of CFNM EU's scenes are uploaded in segments, often many days apart. This will no doubt frustrate those who, like this reviewer, find it a bit much to ask an audience to compile their own full-scene versions, should they want them. Even if the full movie was only available after all segments were added to the site, that'd be a start.

Although the videos and photos you'll enjoy as a CFNM EU member are original productions, this isn't the only place they can be found. An online retail store sells these scenes and galleries direct to viewers, whether they're CFNM EU members or not. Also an odd retail decision, CFNM EU's crew have made 1080p videos inaccessible to anyone, even members, who doesn't pay $9.99 each for them.

A download limit caps your hoarding at 7 GB per day. This likely won't bother you if you favor photos or streaming video, but those grabbing every 720p movie of interest might find themselves being cut off at a crucial moment, ruining all that salacious build-up. What CFNM EU giveth, CFNM EU taketh away.