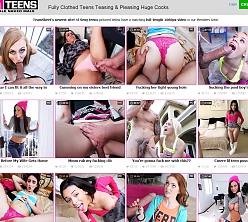 Ever found yourself wishing your thoroughly exciting sexual partner would actually keep some clothing on when getting down to it? If so, you'll no doubt find CFNM Teens an intriguing proposition. A brand new site on the Team Skeet network, CFNM Teens hosts POV porn that never features a fully-naked female body. Sure, she'll pull her panties aside and invite you to slide into her, or maybe she'll drop to her knees and beg you not to soil her new tank top, but whichever girl you choose from the CFNM Teens roster, she'll be just as sexy (mostly) clothed as she is stark raving naked.

Overview:
For most folks slaving away in a 9-to-5 or scraping enough funds together just to get by, the 21st Century leaves little downtime. But with the human sex drive one of the most relentless forces we know, we all make time to fuck even if it's a quickie behind a parked car before a baseball game. The busy young women of brand new Team Skeet website CFNM Teens are so pressed for time (or, on occasion, reluctant to bare their bodies) they don't even get undressed to get it on. Whether a hotel worker seduced by a fully-erect guest, a flirtatious teen who's sick of studying, or a sexy yoga practitioner giving a peeping tom a pussy to pound, each CFNM Teen leaves just enough clothing on to keep the allure of frenetic, risque sex well and truly alive! Shot largely in a POV style that places you in the proverbial hot seat as yoga pants are torn, blouses are partially unbuttoned, and panties are pulled to the side in an urgent rush for skin-to-skin contact, the naked guy part of Clothed Female Naked Male remains largely out of view, which is sure to please many who find this niche a little challenging. Charging $28.97 for one month of access to this all-new archive of partially-nude teen harlotry, CFNM Teens offers HD videos, high-res photos, and free access to Team Skeet's always-expanding world of digital porn. Hell, even fully-clothed women won't keep folks from jumping on this new Team Skeet site!

Pros:
The desperate young women seen at CFNM Teens fall into two categories: those that can't wait to fuck and don't bother undressing, and those that are reluctant to expose themselves to a new (and possibly sketchy) sexual partner, but will suck and/or fuck him all the same. Skinny blonde Alexa Grace, hot-as-hell hipster girl Ava Taylor, shy redhead Abbey Rain, and mouthy Latina Ada are among the stunners seen here.

Shot largely in a POV style, CFNM Teens takes you through a guy's encounter with a new sexual conquest from his point of view, now presented as your own. The camera stares into the wide eyes of the performers as they suck "your" cock, wrap their other lips around "your" shaft, and squeal with delight when "you" blast their bodies with spooge. Videos are available in 1080p downloads and 720p streams that are vibrant and detailed.

Cons:
CFNM Teens has only been in operation three months and has amassed a tiny little archive of just eight scenes. Thank goodness for the rest of Team Skeet's huge archive, because without it CFNM Teens members would devour everything their hard-earned money purchased in about two hours flat.

The handheld POV camera often fails to take in a full-body view of the girls when they're laying back and being pounded around their panties and skirts. Trained either on the girls' faces or holes, never both, the videos don't manage to capture the strongest images a scene might produce and could stand some better direction.