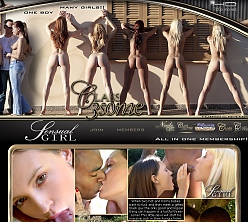 You want one. I want one. And, whether or not she'd admit it to you, your ladyfriend wants one, too. No, I'm not talking about a fibre-optic Internet connection but a three-person sexual experience that will go down in history as your hottest and most memorable sexual experience. Some of us will and some of us won't but Class 3Some presents enough three-way hardcore fucking sessions to keep your interest firmly on trios for some time. Boasting 720p HD videos and 1280px image galleries starring Europe's most beautiful and bold adult performers, Class 3Some is an integral and very lively part of the Sensual Girl network.

Interracial, intergenerational, and extremely intimate, there's plenty of reasons to love these three-person arrangements and the fact that they're captured in good quality 720p HD video streams and downloads is just one. Throw in image galleries at two sizes for every scene, the best of which hits 1280px, and members should be fairly pleased.

Cons:
Unlike some of its fellow Sensual Girl sites, Class 3Some hasn't yet made the transition to full 1080p High Definition and sits a little too comfortably at 720p. An upgrade would be fantastic for videos as well as photos; the models and scenarios are very sexy but slightly let down by the visuals.

Class 3Some has been online long enough to amass an archive of 80 scenes and galleries. No, it's not a particularly large site and, yes, you'll likely find yourself wandering around the other Sensual Girl sites more often than you'd like. Undated updates also make it difficult to determine when the next scene is due.

Here's an odd surprise: when downloading "zipped" galleries for offline viewing you'll find many of them compressed not as ZIP files, but RARs. This is hardly a huge issue and most users will breeze through it with their choice of software, but others might not be so tech-savvy and end up with no photo galleries to view. Many galleries appear to hold badly interlaced screencaps, not photos, which is also disappointing.

One significant difference between Class 3Some and other Sensual Girl sites is that Class 3Some has kept its videos limited to the Windows-favoring WMV format. Those after MP4s or anything more suited to use on Apple systems will be annoyed at this oversight.

Conclusion:
Across the Sensual Girl network you'll see old men fucking young women, hot twenty-somethings sucking dick like pros, tasteful nude photography and, at Class 3Some, hardcore sex scenes that throw in an extra woman to make things more exciting both sexually and visually. Shot in HD and viewable here in 720p streams and downloads, the three-way sex scenes range from gently romantic to aggressive, invasive, and slightly depraved. Most of the time, though, they hit the right tempo and play well whether taking place in a bedroom, a forest clearing, or an medical examination room. Not a very large site, Class 3Some could use some rapid growth but the unreliable and undeclared update schedule makes that seem like a dubious outcome for a site that, in all honesty, could have been truly amazing if not for a few crucial faults. Class 3Some can come back from this, I just don't know when or if it will.