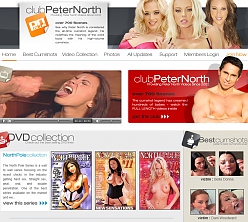 Pros:
Holding more than 700 scenes, Club Peter North has amassed quite a substantial archive covering a large portion of North's prime professional years. With a couple of other Peter North websites threatening this one by their very existence, it's fortunate that this site, Club Peter North, has one of  the largest collection of the man's nut-busting, face-pasting brand of hardcore.

Cons:
Well, folks, here's the bad news: Club Peter North hasn't seen any new content added since more than twelve months. The vast majority of the content is a number years old and it looks it, too. Performers now long since retired are featured and current it-girls are left un-blasted by North's hose. Is the site dead? I'd like to tell you that it isn't, but...

Given the lack of recent updates (and that's being generous), it's no surprise that High Definition video haven't been added to Club Peter North's selling points. Videos are stuck in weak resolutions peaking at 720x480 pixels and photos stalled around 1024x768 pixels; both could definitely be a lot stronger.