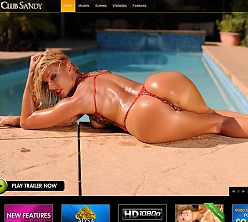 Overview:
These days it seems every woman who considers herself even remotely attractive has a website dedicated to hosting self-shot pictures of her adequately fit body and reasonably pretty face; a vain, self-serving exercise in narcissism unbecoming of a lady. Once in a while, though, you'll find yourself staring at the website of a woman who fits this criteria, but also surpasses the obstacles lesser women come up against. Sandy of 21Sextury's Club Sandy is such a woman. Operating out of her native Hungary, Sandy has established herself as one of European porn's preeminent bisexual super-harlots and on her site you'll see her fucking men and fucking women and sometimes even fucking herself for your viewing pleasure. Sandy also hosts a bevy of European and American pornstars who throw down with vigor and to excess, putting their foxiest foot forward in an effort not to upstage their host, but to match her enthusiasm and sizzling sensuality. For a Mr. Pink's discounted price of only $14.95 a month, Sandy will let you inside her exclusive club for sexual degenerates and provide you with all the HD videos and high-res photos you can handle. (And, yes, she knows you can handle a lot.)

All the most recent Club Sandy videos come outfitted with stunning High Definition videos that reach both 720p and 1080p resolutions and look very good. The videos can be streamed or downloaded. Photos are also delivered in high resolutions and reach 1280px online and 4256px in downloadable zips.

A new scene is added to Club Sandy's already large 1,849-scene archive every couple of days and while the update schedule isn't the most consistent, it definitely brings ample content. All Club Sandy members receive a great bonus to augment their smut-hoarding: free access to more than 35 21Sextury websites!

Cons:
Ads have always been present on the 21Sextury network, but after a mostly positive redesign they're more obnoxious than ever. A little pop-up window alerts you to dozens of messages waiting in your inbox, but they're not messages at all, merely advertisements that you shouldn't bother even entertaining, let alone paying attention to.

The mix of European and American content mostly works very well here at Club Sandy, but some American scenes do seem a little out of place. The far more exuberant performance style, exaggerated moaning and gasping, and the personal styles of the models can occasionally make them seem like more artificial anomalies.

The incredibly detailed 4256px photos can only be seen by downloading the available zip files; they are not available for viewing in the online galleries. It'd be great to see these stunning images available for both viewing platforms.

Conclusion:
The sheer size of Club Sandy's archive should be enough to convince any hardcore fuck fan to lay down thirty bucks and endlessly beat their meat in a month-long marathon session, but quantity isn't the only thing that matters, of course. Club Sandy makes a very strong case for membership with an always-exciting combination of European and American performers whose slightly different styles of fucking and shooting give the site more breadth than one would otherwise imagine. The video content looks incredible at 720p and 1080p High Definition resolutions and the photos, at 1280px and 4256px, look equally impressive. Updates come along frequently and keep members in steady supply of new material. Unfortunately, Sandy herself seems to be increasingly absent on her site, instead leaving most of the heavy lifting to her colleagues. Even without the dominant presence of its headline star, though, Club Sandy more than makes a strong impression, it bores its incredible hardcore into your skull and refuses to leave until it (and, of course, you) reach total sexual satisfaction.