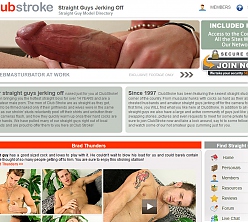 Overview:
Imagine a private members-only club where men could go to relieve themselves of the pressure brought on by work, family, and the whole damn world at large. Imagine a club filled with the smiling faces of friendly men eager to make the acquaintance of a newcomer, ready to welcome him into the fold. Imagine a masturbation club, 'cause that's exactly what Club Stroke appears to be. Claiming to be your premiere masturbating-straight-guy site, Club Stroke is said to ignore gay men in favor of finding adventurous straights who'll caress, manhandle, and, yes, stroke themselves in videos and photo galleries shot for your pleasure. In production for more than 14 years, this long-standing fap-fest now offers High Definition videos of hetero hunks pleasuring themselves in even greater detail than before. See that precum well on the tip of Brad Thunders' dick! Marvel at the diversity of male beauty on display! Pay Club Stroke $24.85 and you'll be inside for one month of unrestricted access to this exclusive audio-visual archive of masturbatory wonder. (And if that doesn't entice you to check out Club Stroke, how about all them big throbbing dicks?!)

A new update hits Club Stroke's homepage two or three times each week and brings either photo or video content to your screen. Videos can now be seen in 1080p and 720p streaming and downloadable frames and deliver decent clarity for amateur-ish productions. Photo galleries offer images for online or local viewing (via zip downloads) and provide two sizes for your convenience: 1280px and 4000px.

Adding some value and personality to proceedings, interviews with models are provided by Club Stroke. These aren't boring video clips, either, but scans of Q&As filled out by hand. Checking out the handwriting of the guys, as well as what they divulge, adds something quite charming and intimate to Club Stroke's work.

Now discounted to only $14.95-a-month, a Club Stroke membership giving you access to the entire archive as well as three other sites (Whispering Lily, Yanks, and Solo Touch) and a collection of bonus video and photo content has never been so easily or affordably purchased.

Cons:
These guys are straight? All of them? Well, call me crazy, but I don't really believe you, Club Stroke. Perhaps I'm limited gay men to a more superficial and stereotypical view than they'd like, but I just can't convince myself that some of the twinkier guys (or the silver foxes or daddies) aren't gay. This likely won't matter to that many viewers, but some will definitely be miffed.

Talk about being hit with the not-very-attractive stick! Club Stroke has a poorly dated and unimaginative design that badly needs revising. The layout doesn't reflect the personality or intentions of Club Stroke at all.

The further you dig back through Club Stroke's archives, the less appealing the guys become and the less detailed you'll find the video and photo content. Stuck in hazy 640x480 pixel frames, these older videos are a nowhere near as strong as recent efforts and are bound to disappoint.