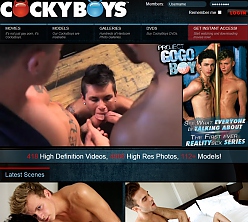 Pros:
Filled to the brim with hardcore homosexual activity, Cocky Boys lets the "badditude" of its slick-haired, tight-bodied, tattooed young men take control, bringing you frenetic sex scenes that see guys beating their meatsticks, plugging each others' mouths and assholes, and even bringing in a gang of well-hung studs to service one lucky (but clearly intimidated) boy. The models are gorgeous young men, eager for fun, and their personal style blends perfectly with the sex and the site as a whole.

With videos now peaking at a High Definition resolution of 1280x720 pixels (or 720p) and provided in more formats (MOV, WMV, MP4) than ever before, Cocky Boys' video selections have clearly been the focus of some behind-the-scenes attention and are much better for it. Photos are look very nice now that they've been made available in three resolutions (1024, 1280, and 1600px) all of which can be downloaded in zips.

New scenes arrive on the Cocky Boys homepage quite frequently, usually twice a week. With more than 400 scenes already online and more than 350 photo galleries, there's a large collection of exclusive content here and it's only getting bigger.

Cons:
Updates may arrive fairly frequently here at Cocky Boys, but the schedule is by no means a regular one. Each new scene can be added either two, three, four, or five days since the previous one and there appears to be no rhyme or reason as to why new content is added on such a shaky schedule.

Predictably, older videos are not delivered in the same HD quality as newer ones, instead falling back to 640x480 pixels and thereabouts. Even some of the earlier HD uploads appear to have originally been shot in standard definition and simply upconverted to HD with significant quality and detail restrictions.

With membership running $29.95 a month, Cocky Boys is bound to be a bit too expensive for those would-be members on strict budgets. Even the trial membership - $14.95 for seven days of access - is a bit on the ritzy side. It'd be great to see another trial option added; how about $2.95 for two days?

Conclusion:
With more than 400 exclusive scenes online and more arriving every week, Cocky Boys is not only a fairly large site, but a pretty wild one at that. With men much closer to your Adam Levines and David Beckhams of the world, physically speaking, the site eschews the overly muscular hunks, hairy daddies, and impish twinks so common in gay porn and instead focuses on the kind of bad boys most women moisten their panties over. The HD videos held here looks quite good, as do the photo galleries, and recent upgrades to both content types have made them far more satisfying than they have been in the past; older scenes, however, still look comparatively crummy. If you're after gay hardcore that doesn't use the usual (and rather bland) models just like everyone else, Cocky Boys is a very good place to start, even with its couple of notable faults.