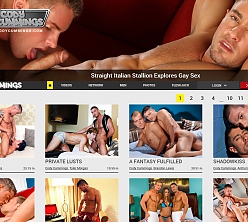 Biology and physical education teacher Kevin Lengyel's name won't likely ring any boner bells among Mr. Pink's readers, but Kevin's former stage name, his previously held nom de porn, definitely will. Once known as Cody Cummings, porn's preeminent gay-for-pay performer, Kevin had his dick sucked by men and women alike, also fucking both male and female holes for his own gratification and the entertainment and arousal of his devoted fans. With 1080p HD videos showing Cody at his ass-fucking finest, his official website on the Next Door World network is still a must-see for gay hardcore aficionados, the man's retirement be damned.

Overview:
At this point, Cody Cummings must be one of the world's most lusted-after men. A roaring superstud of the gay porn world, Cummings has thousands upon thousands of men sitting at home, dicks-in-hand to pay tribute to the object of their unbridled lust and adoration. That said, there's also bound to be a bunch of women watching Cody in action and wishing they were on the receiving end of his attention. Cody Cummings, you see, is what they call "gay for pay" - he fucks and is fucked by men professionally, but not privately where he prefers women. Or does he? Cody has been labelled gay, straight, and bisexual, leaving some of his fans even more curious about his real tastes and tendencies than they already were. Good thing his self-titled official website is on hand to answer all questions. Charging $29.95-a-month for full membership, Cody Cummings' site on the Next Door World network could be in jeopardy now that Cody's up and retired from porn. Is there enough smut here to warrant your purchase or is the site fast in danger of losing its appeal? Where would a devoted Cody Cummings fan turn if not here, the man's self-titled and much-heralded official website? Cody Cummings, we need some answers!

Pros:
Whether he's being blown by or banging a hot gay guy, sharing a woman with a bisexual partner, or keeping his straightness in order with some pussy-pounding hetero action, Cody Cummings is a sexual dynamo who oozes personality. Standing 5'9" tall at 169 lbs, the hunky brown-haired, brown-eyed gay-for-pay champion has never looked better than right here.

Currently holding more than 300 videos and photo galleries, Cody's online content archive is far from bare. Updates aren't coming as swiftly as they once were, but there's a lot to enjoy here all the same. Bisexually active, Cody dives into women pussy-first but lets his male partners work their magic on him (not the other way 'round). From locker-room fantasies to tender, even romantic hetero couplings and MMF threesomes, Cody's a versatile… (wait, better make that) variable stud.

Now hitting impressive heights of 1080p, Cody's HD videos showcase his impeccable physique in stunning quality. Every muscle is toned and defined and captured beautifully, as is his slyly winning smile and sexual energy. Streaming and downloadable videos are accompanied by photo galleries holding 1920px images both online and in zips.

All Cody Cummings fans eager to join the ranks of his paying customers can now do so at Mr. Pink's discounted price of $14.95. This introductory offer lasts one month and should give you a chance to find out whether Cody's worth coming back for at full-price. Members also receive free access to another fourteen Next Door World sites, each one offering exclusive HD videos.

Cons:
What does gay porn's hottest straight guy need to do to get his very own website design these days? 'Cause whatever it is, I guess Cody Cummings isn't doing it. Once you've logged in and landed on Cody's homepage, you'll notice it looks nearly identical to the Next Door World network hub. Actually, the only real difference is that every update now features Cody. It'd be great to see a more personalized, unique design here.

As already mentioned, Cody's not actually gay and some viewers hate that. His scenes with women (Heather Vahn, Delilah Blue, Sierra Day, and Katie Cruise, among others) won't interest them much and although he enjoys time with many great gay performers, Cody's without question a top, so don't expect to see him get fucked by a trio of snarling, spunking black dudes anytime soon.

Some scenes have been posted not only to Cody Cummings archive but to other Next Door World sites with applicable niches. Scenes that pair Cody with a woman, for example, can be found on Next Door Hookups, the network's token straight-sex-for-gay-eye venture. It'd be great to see this duplication cut back now that full network access is included in memberships.

The navigation in place here needs some work. Search queries can be tough to nail, results ranging from spot-on to wildly inaccurate. This is especially difficult with Cody's site integrated fully with and relying totally upon the Next Door World network; all Cody Cummings searches are really Next Door World searches.

Conclusion:
Now that Cody Cummings has retired and updates are hitting his site on a fairly lazy schedule of about one-scene-per-month, it's fair to say that Cody Cummings (the website) is nowhere near as appealing as it once was. I'm sure Next Door World will keep pillaging their archives in search for forgotten gems starring their flagship star, but now that Cody's teaching adult biology classes (yes, really) and not getting blown by gay guys on the Internet, any activity here is bound to be short lived. That said, what's already available includes some dynamite performances and pairings with both men and women (and both), proving Cody to be as strong a bisexual performer as he is gay stud for hire. Network access increased the value of a Cody Cummings membership but, quite frankly, there's not much of a future here and you'd be better off joining Next Door World directly.