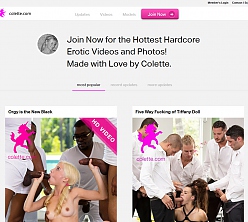 Pros:
Colette's take on sex isn't as timid as many other visually rich sites, dealing in DPs and group activity just as often as lesbian hookups and tender couples' sex. Titles like 'Caprice Loves Double Dick' and 'Anissa Gets Her Interracial Gang Bang Wish' should clue you in to what's happening here if the gloriously explicit previews don't.

Cons:
Updates are not exactly regular here at Colette. Matching image sets and videos are added separately, often a week apart, while new scenes (the video kind) can arrive anywhere from two days to two weeks apart. Colette is also modestly-sized at this point, with barely 100 scenes.

No network access to X-Art has been included in Colette membership packages, and what a shame that is. It'd be great to see a deal in place that would at least bring some of Colette's excellent X-Art work to this site as bonus content, easing the tedious wait between Colette's own updates.

Most models cast by Colette are clearly favorites of hers. If not, why would they make so many return appearances? Many sites aim to bring in new girls all the time, offering fresh faces and personalities to viewers, but not Colette. This heavily-curated site shoots a small selection of talent over and over again.