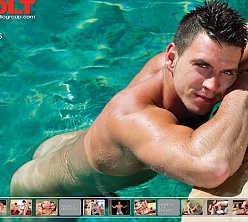 The guys posing for Colt Studio Group might not walk on four legs or have any chance of winning the Kentucky Derby or Melbourne Cup (too tall to be jockeys, these fellas), but they're certainly in possession of fully-operation genitalia. Wanna see these thick cocks and the beefy guys that wield them as only one of the most influential and acclaimed gay porn studios can show them? Colt Studio Group endeavors to satisfy all comers with a busy collection of hardcore sex, softcore posing, and sexy homoerotic imagery of the highest quality. Sure, it's from years ago and is presented in some quite strange ways, but what are you gonna do, look a gift colt in the mouth?

Overview:
"Before COLT Studio existed, men were badly shaved, with poor haircuts, wore bad clothing, and had questionable personal hygiene. After COLT Studio established its aesthetic, guys, at least gay ones, aspired to be much more. Guys were now able to be beautiful in a way that our culture had only allowed women to be. Guys were now becoming super human by approaching physical perfection. The COLT Men are the men society worships and aspires to be." Sometimes, to best understand a the intentions and aspirations of a notable porn studio, it's best to go straight to the source. And with vivid descriptions of its own importance such as our opening spiel, Colt Studio Group seems to be the premiere authority on, well, Colt Studio Group. Also hosting work by Buckshot and Olympus, two other exemplary gay hardcore outfits, Colt Studio Group packs a hell of a lot into its archives. Harkening back to an era where mustaches were bushy, chests were hairy, chaps were ass-less, and men, even gay men, were toned and muscular, dominant and commanding. It's basically the golden era of gay porn in a tidy little digital nutshell! Charging $29.95-per-month for access, Colt Studio Group aims to fill the sexual void in your life with more beefcakes, butt-fucking, and roaring boners from one of gay porn's defining eras and studios. And, if you know what's good for you, you'll let them.

Colt has long been home to gay porn's most muscular, masculine men. Or, the most masculine a man can be dressed only in leather straps and sporting hyper-gelled hair. Notable nut-busters like Chase Hunter, Chris Wilde, Sean Lawrence, Tony Lombardy, and Buck Santiago offer a number of different personal and sexual styles, from chiseled and aggressive leather-clad tops to demure pretty-boy bottoms.

With weekly updates keeping things growing, Colt Studio Group is home to almost 700 videos and galleries pulled from almost 200 DVD and feature releases. Throw in some digital beefcake calendars and wallpapers and most members would be pretty happy to hand over $14.95 for their first month at Colt, a discount provided by Mr. Pink's.

Cons:
Sometimes text-based information can get in the way of its more entertaining and arousing cousin, image-based information. Would you rather read a forty-line blurb about the dude who'll be creaming some mustaches in your chosen scene or watch those acts take place? Sometimes the usually-interesting text can take up most of a page, leaving little space for, say, the six-men-per-page model index.

At any given time, most users can take a look at their screen and spot anywhere from three to ten Colt logos. Video watermarks are unnecessarily large given how hard it must be to mistake a Colt scene viewed on a Colt site for anything but a Colt production. We love you, Colt, so there's no need to beat members over the head with your branding.

Strangely, Colt has elected to make some photo galleries available as video slideshows. Almost identical to actual videos before they're played, members should be careful to note the keyword tag "image galleries" when browsing the video collection to spot these animated galleries. Most of these image-gallery videos contain images also found on their accompanying (and zip-less) photo gallery page. Confused yet? Me too!

A streaming-only site from top-to-bouncing-bottom, Colt Studio Group doesn't allow any downloading of its videos whatsoever. This leaves members with no choice but to keep paying month-after-month for as long as they want to retain viewing privileges. While your first month can be had for only $14.95, subsequent months are charged at full price.

Conclusion:
With no downloading available to members, Colt Studio Group risks alienating those who would keep it afloat and filled with viewer activity. Still, with many hundreds of nicely-aged gay hardcore movies now broadcasting in unexpectedly vibrant HD Flash streams, it's unlikely the lack of downloads will send any truly devoted or desirous fans packing. Strangely enough, many recent HD videos are not videos at all, but photo galleries animated to appear in sequence over three or four minutes; not exactly the best a beefcake-filled studio like Colt should be able to muster, is it? Weekly updates are good to see in place, though it'd be great to see more than one new scene (sometimes an animated gallery) added per week. Colt Studio Group won't appeal to all gay hardcore fans, what with its vintage style and strange photo presentation habits, but it's a fun and lively place to be if muscular hunks with big swinging dicks and cum-hungry boyfriends is your bag.