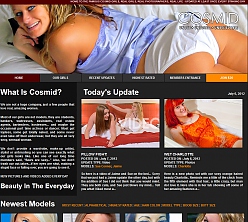 Cosmid is a strange name for an adult website, yes, but Cosmid's M.O. is a necessary breath of fresh air in an industry filled with gaping assholes, cum-plastered faces, and screaming, screeching superwhores, presenting its members with a large, exclusive, and frequently updated collection of seductive tease and softcore nude content. With 720p HD videos and 1600px images on hand, Cosmid more than makes up for its signature lack of explicit nudity with real amateur girls, sedate yet sultry scenes and galleries, and an instantly identifiable sense of fun and flirtation. It might not introduce you to any new (and comparatively freakish) sexual acts, but Cosmid definitely confirms the idea that sometimes all you need to experience sexual bliss is an attractive girl with big, natural tits.

Overview:
With a name that conjures up images of supernovas, black holes, star clusters, and perhaps an orbiting TV satellite or thirty, Cosmid could be a site devoted to alien chicks much like the three-bodied hooker in Total Recall. Then again, it could not. You won't find any women from other planets on Cosmid, just an assortment of busty human models from the USA, the UK, and a few other European nations you might not otherwise care about. As Presidential candidate Mays Gilliam loudly proclaims in Chris Rock's 2003 political comedy Head of State, "Everyone loves a big-tittied woman!" and while Cosmid certainly has its fair share of such ladies, don't expect to see their delectable racks wrapped around a dick, bouncing as they get plugged from behind, or glistening under boom lights after being plastered with ejaculate; Cosmid is an entirely softcore site and focuses not on hardcore sex or sexual acts of any obvious sort but on seductive teasing. "We are not a huge company, just a few people that love real, amazing women," the tour page states before continuing, "Most of our girls are not models, they are students, bankers, waitresses, assistants, real estate agents, bartenders, hostesses… and maybe the occasional part time actress or dancer." Many so-called "amateur" adult sites merely recruit the same porno newcomers as everyone else, essentially nullifying the amateur part of their professed focus. Cosmid, which costs $20 a month to enjoy, doesn't supply its featured women with makeup, wardrobe, or a stylist, and outright refuses to utter the word "airbrushing" in any serious context, guaranteeing authenticity from the first shutter snap to the packing away of the final piece of equipment. Does this authenticity guarantee your satisfaction? Not necessarily, but take one look at the amply endowed girls assembled here and you'd be hard pressed to think of a more exciting amateur softcore site than this.

Pros:
Instead of churning out the usual ass-busting, face-blasting hardcore pornography, Cosmid takes a more refined and suggestive approach, depicting its models in nude, partially-nude, and non-nude tease and seduction shoots. The girls bring their bodies, personalities, and sexualities to the fore and seem to enjoy flirting with an invisible audience, whether they're dressing in costume, wearing wigs, sporting bikinis, or simply taking a shower.

Hailing from all the U.S., the UK, and a couple of Eastern European nations, the young and beautiful models featured here at Cosmid are (mostly) naturally busty hotties who fill out their self-selected outfits before showing a bit more skin. Few of the models are making the rounds of adult websites - Burning Angel's Larkin Love, for one - and there's a great range of personal styles here, from goths to good-two-shoes, beach bunnies to almost-white trash broads.

Image quality has always been an integral component of Cosmid's success and the currently available viewing options reflect that, shining strong yet amateur light on the girls. Photos peak at 1600px and can be viewed online or offline via zips, while videos are now hitting 1280x720 pixels - that's HD, baby! Everything here looks great with lots of detail and a strong sense of naturalism.

There is currently 735 videos and 835 photo galleries online at Cosmid, and updates land on the homepage every day, alternating between video and photo content. The Cosmid team clearly believes in its mission and the detailed, frequent blog posts are great for finding out what's going on behind the scenes.

Cons:
It's to be expected when dealing with a softcore tease site, but fair warning for those needing full and explicit nudity: there ain't much here, pilgrim! Many of the girls seem most comfortable showing off their bodies supported by some sexy underwear, a swimsuit, purple vinyl leggings, and even a variety of wigs and kinky fetish wear; they remain at least partially clothed throughout their shoots.

For a site that is clearly devoted to its performers - there's even a blog commiserating with one model who found unwanted public attention thanks to her Cosmid work - it's surprising to find pitifully uninformative profile pages. More interaction with the girls would be great; we want to hear them talk about shooting amateur softcore!

"We don't trash our outtakes," Cosmid's tour pages boast. "If her eyes are shut, making a stupid face or falling over, you are going to see it." This unedited way of shooting can give galleries and scenes a strong sense of reality, but it can also make them seem far too amateurish to be worthy of your attention. Sometimes trashing the outtakes is a very, very good idea.

Although they're already looking very nice at 1600px, a further upgrade would be great. Imagine seeing Cosmid's busty young flirts reveal their cleavage-creating racks in 2000px or even 3000px frames! Totally do-able considering current technology, so let's have it, Cosmid!

Conclusion:
For a number of years, Cosmid has earned the respect and admiration (and praise) of yours truly, Mr. Pink, by sticking to its guns and insisting that there's a place for genuinely amateur softcore and non-nude pornography. Nowadays nothing has changed - at least no for the worse - as Cosmid continues to increase the size of its already large database of teasing, flirting imagery. While some might lament the absence of spread-eagle pussy shots, fingers in assholes, or facialized professional cum dumpsters, anyone with any sense of romance and subtlety will see Cosmid for what it is: a thoroughly impressive softcore site that seems to do almost everything right. Although there are a few instances where Cosmid's unedited nature can make for disappointing viewing, most galleries and videos showcase the busty, beautiful young amateur models - well, non-models really - with an impressive feeling of authenticity that makes Cosmid essential viewing for those seeking an adult site that harkens back to an era where suggestion and subtly were far sexier than a prolapsed anus.