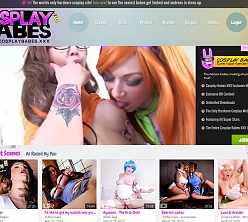 Cosplay is the act of dressing up as and role-playing as your favorite pop-culture icon. Be it Batman or Billy Idol, cosplayers have long been having a grand old time pretending to be someone else, someone only barely human, and now the best and bustiest pornstars in the United Kingdom are getting in on the act. Cosplay Babes, part of the Stiffia network, showcases foxy costumed sluts as they revel in their new fantastical identity. Hell, some of them get so turned on in form-fitting spandex they don't even wait for a partner, staring into the camera lens as they pleasure themselves for your entertainment. Cosplay Babes is your every superhero, sci-fi, and fantasy fiction wet dream come true.

Overview:
It's been a long time coming, but we're now seeing female comic, animation, gaming, and pop-culture fans gaining increased acceptance as peers within notoriously closed fandoms. From Star Wars and Harry Potter to classic sci-fi and comic book icons, female fans can now indulge their geekish tendencies without being shunned by their friends and potential suitors. In fact, geekdom is sexier than ever before and cosplayers, fans who dress as their favorite characters, are without a doubt the sexiest in the fandom. At Cosplay Babes, you'll find a bevy of British ladies, all curves and dirty mouths and cock-sucking lips, dressing up in the skimpy, suggestive costumes of their favorite movie, cartoon, and comic characters. Clearly turned on by their fantastic outfits and feeling their chosen character channeled through them, the models don't just pose, they seduce, stripping from spandex unitards and elaborate kimono-like anime gowns to pleasure themselves, each other, and whichever stud drops by to talk shop superhero-style. There's plenty of colorful carnality here at Cosplay Babes, another of Stiffia's expansive network offerings, and members enjoy complete access for $29.95-a-month. Can you spare some of your graphic novel purchasing funds and give these charming, lively lasses a little attention? (No doxxing, though, please.)

About half of Cosplay Babes' scenes contain penetrative hetero sex, the others pairing two women together or letting one model show herself off solo. Thanks to the costumed characters doing the fucking, the sex is fun and lively, even adventurous. Costumes are peeled off or pried open and, although the costume itself is often a scene's sole fantastical element, add just enough excitement and color to Cosplay Babes' raunchy romps.

Shot in High Definition and delivered in streams and downloads of 720p and 1080p resolutions, Cosplay Babes' videos show colorful scenes in very good detail, capturing the gorgeous models' irresistible curves and excitable demeanors as they pose sexily in their usually skin-tight outfits. Photo galleries are also on hand and also deliver very strong images, this time at an incredible 4928px resolution!

Now discounted to only $14.95 for your first month of access, Cosplay Babes is a very lively and quite affordable way to explore the wonderful (and often weird) world of pornographic, sexually explicit cosplay. Along with this site's own 120-scene archive, which sees a new scene added every Friday, all members can choose another of Stiffia's websites to access at the rate of one-per-month during an extended stay at Cosplay Babes.

Cons:
Unlike most online adult networks, Stiffia's not immediately available to all paying Cosplay Babes members. Remain a member for more than one month and you'll be given your choice of bonus sites to unlock, one-per-month, for however long you decide to stick around. (If you're after complete network access, that'll be forever!)

Updates were arriving at Cosplay Babes on a strict weekly schedule until very recently. Is this last missed deadline a sign that future updates will also prove absent or is it just a short break in the regularly scheduled programming? Other Stiffia sites have proven the former, but let's hope Cosplay Babes turns out to be the latter.

The models don't always show an affinity for the character they're playing and it can seem like the director or producer just picked his favorite skimpy spandex outfit and asked her to pose on a sofa. That's hardly the in-depth and uniquely inspired visions of popular culture we've come to expect from genuine nerds, is it now?

Conclusion:
Taking inspiration from comic and anime conventions that see exhibition hall floors crammed full of spotty-faced teenagers in bright costumes, Cosplay Babes hauls cosplaying in hardcore territory and does it very nicely indeed. High Definition videos capture every colorful piece of spandex, latex, or leather adorning the curvaceous bodies of such models as Jasmine Jae and Yuffie Yulan, presenting streams and downloads that peak at 1080p. Updates usually arrive quite frequently, though the occasional period of downtime can interrupt, and there's a small but solid foundation here, 120 scenes of exclusive, original material you won't find anywhere else. Sure, Stiffia network access is a tedious drag but there's certainly enough happening at Cosplay Babes to keep any viewers eager play Spidey and web up Mary Jane's slutty red-lipped mouth sticking around until Stiffia unfolds and invites them in. And you thought regular cosplay was boner-inspiring enough as it is...