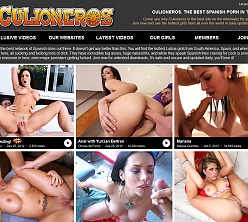 Pros:
Boasting an enormously talented roster of adult performers from South and Central America, the USA, and many regions of Europe, Culioneros has one of the most impossibly irresistible casts on the 'net. From Spanish-speaking Latinas like Mira, Lara Baby, and Carol Ferrer to Hungarian Kyra Hot, French Anissa Kate and Americans Asa Akira, Jada Stevens, Eva Angelina, and Christy Mack, there's someone for every taste here.

Cons:
When browsing Culioneros, you'll inevitably spot a preview thumbnail to something that, although very appealing, appealing enough to entice you to click its link and prepare for viewing, isn't accessible with a regular Culioneros membership package. These scenes are hosted by Bang Bros-operated sites and demand extra payment, while all your Culioneros membership gets you is these ten Spanish-language sites.

Once upon a time, Culioneros was extremely active, adding four or five new scenes every week and looking very much like a network that could wrestle attention from the big dogs. Unfortunately, that schedule and that promise both died out back in October of 2013; nothing has been added to the network since that date.

Culioneros launched in 2012 and now, only two years later, not only seems essentially dead, but also appears to be rebranding itself as both Pornditos and My Dirty Latina. The main Bang Bros multi-network hub shows this network under those two new names as well as Culioneros. Just what the hell is going on here?

Quite a few of Culioneros' most exciting performers later moved to performing on Bang Bros sites, some of them even taking spots in the update schedule usually reserved for English-speaking women on English language sites. It's almost like Bang Bros saw Culioneros failing and just said, "Fuck it, let's combine 'em without giving members access to both!"

Conclusion:
At this stage, Culioneros seems like a cynical attempt to snatch your thirty dollars and answer complaints about diminished value with "Eh, it's old but it's still hot!" While that may very well be true - actually, Culioneros is by far the most consistently salacious and adventurous Spanish-language porn on the market, in my opinion - the lack of any activity on the site during the past seven months is cause for alarm. Will any of these ten once-promising websites become active again or will Culioneros simply sit here confusing the greater Bang Bros community for another few years before making a quiet retreat? Really, the way things seem to change at Bang Bros HQ, it's impossible to say for sure. (Culioneros can also be found, rather confusingly, by the names Pornditos and My Dirty Latina.) What is online here - 452 HD videos sizzling with amazingly sexy women doing amazingly sexy things wherever and whenever the mood strikes - is very enjoyable, but a network, even one as entertaining and arousing as this, cannot rest on its past laurels. Culioneros can and indeed must rise again.