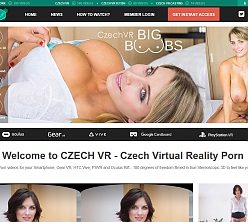 Overview:
When you think of immersive Virtual Reality experiences, you’re likely not thinking specifically of those produced by the Czech, are you? Japan, China, and the USA may be spearheading the rush into a totally virtual world but a small contingent of Czech porn producers have seized the new tech to create some excellent virtual sex encounters with young, lively beauties most commonly seen sucking and fucking their cares away in professional European adult movies. Part of the Mental Pass network, CzechVR continues its hosts dedication to Czech women of all kinds, capturing the likes of Paula Shy, Billie Star, Lucy Li, and Luna Rival in all their seductive direct-to-camera glory, wrapping each woman in a 3D Virtual Reality enclosure that leaves her at your feet begging for a taste of your cock. Promising compatibility with Gear VR, HTC Vive, PSVR, Oculus Rift, and that clunky-but-workable Google Cardboard thing for your smartphone, CzechVR is a Euro-flavored VR venture well worth checking out much more closely. Charging $24.95 for monthly access, this particular VR vendor is well within most beat-off budgets, but first let’s examine CzechVR from tip-to-tail as only Mr. Pink’s can!

Pros:
Home to original and exclusive content, CzechVR brings you eye-to-eye and clit-to-cock with some super-sexy Euro starlets who, in their own unique ways, ravage the home viewer by way of 3D VR mini-epics. Staring into your eyes, whispering sweet nothings or issuing salacious commands, the featured women do a great job of convincing you you’re being seduced by one of Europe’s finest professional females.

Available from three different servers (EU, West USA, East USA) targeted at localizing connections, CzechVR delivers to its viewers some very strong VR videos. Streaming in LQ and HQ versions and downloading in frames from 960p at 30 FPS to 1920p at 60 FPS for even smoother, more realistic movement and activity. Video quality here is very high and brings you immersive sex scenes without any major fuss.

A new Virtual Reality fuckfest arrives at CzechVR about once-a-week but that schedule is augmented by the CzechVR Fetish and CzechVR Casting updates, also arriving weekly and adding some wider variety to the already expansive CzechVR offering. The current archive holds almost 80 VR casting episodes and more than 60 VR fetish encounters, adding plenty of extra value and variety to all membership packages.

Cons:
For better or worse, CzechVR concerns itself solely with video content and leaves fans of still photographs nothing to devour. No photo galleries have been provided here, nor are there screencaps to show what happens within a given scene. With streams sometimes taking a while to load, these other preview methods are notably absent.

Mental Pass might not be the most currently techno-savvy network when viewed as a whole, but CzechVR membership also connects you to CzechVR Casting and CzechVR Fetish, two sites that augment CzechVR’s sex scenes with more casual and naturalistic casting couch sex and kinky fetishistic activity.

Repeated log-in prompts slow down your navigation from site-to-site on the Mental Pass network and may cause members some frustration. The navigation system isn’t exactly top-of-the-line either, just offering the bare minimum to get you from scene-to-scene, site-to-site. A bit more information on each model would also be a huge help to newcomers.

The Mental Pass Network currently provides access to a little over 1000 individual scenes across nine websites. Unfortunately, only the VR sites are still seeing new updates of fresh content. All other sites have fallen off the update schedule and simply sit with their years-old archives waiting for you to eventually turn their way.

Conclusion:
Though not exactly huge at the moment, and though it’s surrounded by quite a few lackluster adult vendors, CzechVR manages to impress on a few different levels. The cast of this immersive 3D fucking experience includes many top Euro starlets and, given a chance to stare into ‘your’ eyes, talk dirty to ‘you,’ and generally make ‘you’ believe you’re balls-deep in an international porno superstar’s snatch, most models put forth some of their best performances. Streaming and downloading in a number of HD formats suited for use with Oculus Rift, Gear, Vive, and other VR players, the content looks quite good, presenting clear POV angles that don’t restrict your ogling to just one view. It’d be great to see a bit more activity hit CzechVR - there’s a little disparity between the main VR content and the Fetish and Casting updates - but even with fewer than 150 scenes, this is a VR site well worth paying close attention to.