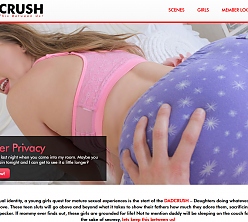 Team Skeet was always a little, well, nutty (if you’ll excuse the pun) but maybe this time the hyper-colorful network has gone too far. (Or, lacking network connectivity, maybe not.) Dad Crush sees morally-dubious interactions between step-dads and step-daughters that push the boundaries of acceptable family values about as far as legally possible. The one, two, or three mini trysts contained in each exclusive Dad Crush encounter bring High Definition POV perversity to your screen and actually prove quite sweet and charming in many ways. (Weird, I know!) Part of a throng of new standalone family-fucking sites from Team Skeet, Dad Crush is a wild daddy-daughter fantasy.

Overview:
Families can be frustrating, isolating, and psychologically damaging, it’s true, but they can also provide nourishment and support and occasionally a quite handjob while mom’s sleeping on the sofa. Wait - what? Dad Crush discards all social mores, codes, and standards, letting the long bubbling lust between a father figure and his attention-seeking step-daughter explode, letting potential disaster strike and possibly destroying the family unit entirely. Dad Crush, it seems, knows what’s worth it and what isn’t: casting a bevy of today’s brightest young starlets in character-driven scenes that often feature multiple sexual encounters placed over a day or two of heavy flirting, this step-cest site takes things to a whole ‘nother level. Delivered to viewers in High Definition streams and downloads exclusively available at this Team Skeet-operated site, Dad Crush sees father figures lay down the law or, in some cases, prove to be total pushovers when a the pretty young adult daughter of their spouse throws a few dozen flirty looks their way. The resulting sex is heavy on in-character dirty-talk, plenty of sultry eye contact, and some saucy secrets to keep from mom. Dad Crush isn’t yet a part of any real network but even on its own, this is a raunchy and irreverent take on the immensely popular step-cest sub-genre.

Pros:
Taking its time to get each scene established with character, motivation, and environment, Dad Crush plays out a lot like a virtual date, only this time the woman in question is arguably the one female you really shouldn’t be looking at so lustily. Whether she asks her step-dad for help, money, or advice and he promptly provides all that (and more), or whether he’s taking a more coercive and corruptive role, Dad Crush is more than just sex.

With two or three sexual encounters included in most Dad Crush scenes, fans are given plenty of opportunities to ogle the lusty lil’ sluts disgracing their families. And, in awesome 1080p HD downloads and 540p streams, everything looks pretty damn tasty here. So tasty, in fact, that such transgressions against our families start to seem a little harder to ignore. Photo galleries also provide tantalizing shots online and in zipped sets.

A new and delightfully forbidden daddy-daughter encounter lands here every Sunday - presumably while mom’s off to church or out shopping - and adds to the exclusive growing archive ready and waiting to be devoured by Dad Crush members. There’s 93 scenes already online and, discounted to $14.87 per month, a Dad Crush membership provides access to all.

Cons:
Not only is each Dad Crush scene published with almost no worthwhile information - no model names, no stuntcock credits, no keyword tags or detailed description of the action - but there’s no real navigation tools to speak of. Members are left with simple numbered pages to scroll through, totally relying on their own recognition of sexy new starlets to make viewing decisions.

Perhaps the decision to keep Dad Crush free of any performer names or credits is an attempt to make it seem more authentic. Obviously this isn’t going to work when we can see any one of these lusty young ladies sucking and fucking elsewhere for cash and celebrity. (And it seems almost completely unbelievable that step-dads and daughters talk to each other in such obviously sexual tones, but hey - fantasies!)

Conclusion:
What’s a sexually frustrated step-dads to do when the overly precocious barely legal daughter of his curiously absent new wife asks to have her pussy massaged, licked, and filled with dick? If Dad Crush is any indication, fucking is a-ok! In colorful HD updates, most of which contain multiple mini-encounters, often laid out in an oral for him or her, then the favor repaid before we finally get to the actual, real-deal penetrative sex. Some of the freakier “daughters” are especially fun to watch but the scenes can be brought down quite significantly when the acting chops are lacking. (Zoey Laine can really sell a come-on!) Videos and photos all look quite good and from their POV stance bring plenty of sultry eye contact in the seduction sections before diving down for more juicy, graphic hits. The phoney oral and vaginal creampies aren’t always present but, when employed, can really pull you out of a scene, at least until the next outrageously scandalous activity starts. It’d be great to see Dad Crush pull together into the Team Skeet network or a smaller network of Team Skeet’s standalone step-cest ventures but, still, if this particular fetish is your thing, you’ll be thrilled Dad Crush is kicking its way to Internet infamy.