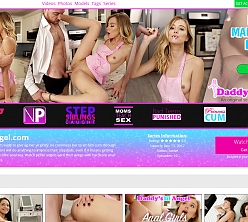 Cons:
Serving up one scene each month and currently holding just 10 to its name, Daddy’s Lil Angel is by no means large or wholly satisfying. Extended access to other Nubiles sites will surely ease this particular concern a little but if it’s Daddy’s Lil Angel and its ass-fucked teen harlots you came here for, you’re not given much to feast on.

Speaking of creepy, some of the male performers play their roles a little too well. Sly looks, manipulative tactics, and physical force all play a role in these encounters - though not always from the men’s side - and the scenes can play out like little abusive, coercive power plays. Of course, that can be enormously hot to some, but not others.

Conclusion:
Any site as small as Daddy’s Lil Angel will struggle to bring in new subscribers just as its featured young girls struggle to take their daddy’s dicks - at first, anyway. Once the action kicks in, it’s all steamy rear-pounding and cowgirl grinds galore, the HD video streams and downloads capturing everything very nicely indeed. Leading up to the cock-to-ass contact, though, there’s usually some risqué interplay that sets the scene for a family-fucking affair that’s among Nubiles most daring. The excitement carries through the scenes with strong performances from the majority of the cast. It’d be great to see more of Daddy’s Lil Angel and I have a feeling, if they got over the name and step-cest premise, porn viewers would be joining me, throwing their money at monthly subscriptions by the thousands. That may take a while, but the draw of the entire Nubiles Network, to which all Daddy’s Lil Angel subscribers gain free access, is incredibly strong and this site, small though it may be, is literally just as good as any other entrance into this carnival of teen and family-focused carnality.