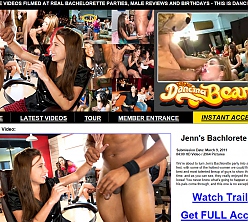 No animals were harmed in the making of Dancing Bear's uniquely carnal almost-all-female party porn, but a few husbands and boyfriends are likely pretty pissed right about now! Their wives and girlfriends went out for a bachelorette party or bridal shower for a friend, got a little too drunk on Jaeger and ended up blowing both dancers hired to provide the evening's entertainment. And here's the kicker: she not only did in in a room full of people cheering her on, but someone shot the whole shebang and it's now online for all (paying members) to see. Only at Dancing Bear, folks.

Overview:
A dancing bear might not sound like entertainment you could endorse. After all, it's probably cruel to the bear and it's not like you've ever seen a grizzly shuffle their feet like Fred or Ginger. Why then would a Bang Bros-produced porn site named Dancing Bear appeal to you? Sluts and plenty of 'em. Ok, so the women seen wrapping their lips around a stranger's boner in these exclusive CFNM (Clothed Female Naked Male) scenes don't exactly leap out of their clothing and start fucking anyone and everyone in sight, but they do let loose after downing a few too many cocktails at their bachelorette parties (or whatever reason they've come up with to go absolutely wild). Dancing Bear has been online since mid-2009 and should now be heavily loaded with the filthiest, most degenerate all-female (entertainment excepted) parties you've ever seen. It should, but… it seems Dancing Bear has fallen into a little trouble of late, and not with the boyfriends and husbands of these breast-baring, cock-stroking revelers, either. Will your $29.95 monthly membership fee get you all the marvelously debauched things you've heard Dancing Bear offers or will it only disappoint?

Although nowhere near as plentiful as many other Bang Bros-run websites, with 111 scenes and galleries, Dancing Bear holds an adequate collection. If you do run out of material, though, there's another six sites open to all Dancing Bear members: Public Invasion, Haze Her, Culioneros, CFNM Spot, STFU College, and Busty Adventures.

Cons:
No longer even trying to keep to a weekly update schedule, Dancing Bear now adds content about once-a-month and doesn't seem to aim for regularity or predictability, simply adding scenes whenever they're ready, whenever someone gets around to it. Hey, at least it's still adding content!

Conclusion:
Dancing Bear's endlessly appealing premise - drunken female revelers are entertained by and then service stiff-dicked male dancers - makes this undervalued site a must-see part of the extended Bang Bros family. That said, it'd be great to see Dancing Bear ditch the professional women for an all-amateur cast, keep the guys' heads covered with bear masks (for the lols), and update more than once each month. Holding only 111 scenes, Dancing Bear isn't especially plentiful and considering there's very few sites like this (and fewer still in English), it's a shame there isn't a whole lot more to show for five years online. Bonus sites are no longer updating at all and it seems likely that Dancing Bear will head in that direction before it starts racking up the episodes with weekly updates. Still, as disappointing as some elements of this unique and original site may be, Dancing Bear is wild party porn at something close to its very best.