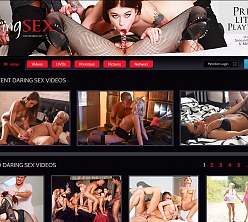 Hotting lofty High Definition resolutions of 1080p in streams and downloads both, Daring Sex offers its members pristine visuals that could only be bettered by a 4K Ultra-HD upgrade. Photo galleries also look very good in 1920px frames, online and zipped. New scene packages are added to the nearly 650-item archive already available here every week, keeping the site growing at a steady rate.

Fame Digital network access is granted to all Daring Sex customers, who can now wiggle their way inside for a measly $14.95 (first month only). When you consider how much content is to be found on Daring Sex, let alone on Fame Digital's eight other websites (Peter North, Tera Patrick, Silverstone, Rocco Siffredi, Silvia Saint, Low Art Films, Devil's Film, and White Ghetto), that's an insanely affordable way to try Fame Digital on for size.

Cons:
Daring Sex shoots most of its scenes with plenty of shadows and darkness. Sometimes this works marvelously, but on other occasions it can leave you wishing there was a clearer visual path to the sex. The cinematic introductions look fantastic, yes, but the acting found in these pre-sex portions is often quite poor.