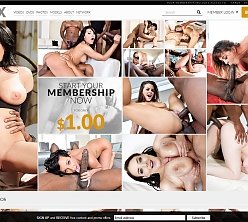 Pros:
The women and men of DarkX leap across racial divides and commune over ann undeniable human commonality: the need for awesome sex. Whitney Wright, Cadence Lux, Valentina Nappi, Anissa Kate, Remy Lacroix, and Ivy Lebelle are among the most committed BBC hounds in the business and they do marvelous work here on the cocks of, among others, Sean Michaels, Jason Brown, Ricky Johnson, and Isiah Maxwell.

Adding another dose of supreme interracial sex every Thursday, DarkX continues to grow its excellent archive. Each update brings 1920px photo galleries (online and zipped) as well as the excellent 1080p and 4K (2160p) streaming and downloadable videos. The contrasting skin tones of DarkX look quite stunning in these great 4K videos.

Cons:
This is something of a tough niche to dwell in. After all, aren’t most interracial sites a bit demeaning and objectifying? Is someone’s skin color really an indication of their sexual appeal or prowess? Mason does well dealing with this somewhat touchy material but DarkX doesn’t avoid these stereotypes, tropes, and traps entirely.

Photo galleries were once added to DarkX in pairs, one taking a gentler glam-tinged look at the models, the other opting for hardcore action shots. Nowadays, new scenes are accompanied by a single photo gallery reaching 1920px, a resolution that could definitely be improved upon. A photo overhaul would be great to see across the XEmpire network.

It’d be great to have more info on the models, and especially on their thoughts about sex with black men. Do they inflate it beyond all believable expectations or see it as simply as they do fucking anyone else? Are they committed BBC hounds or just fond of the bigger boys of any race?

Any decent cinematographer will tell you that lighting a white face is very different to lighting a black face. When it comes to the entire bodies of its performers, DarkX can end up keeping everyone a bit under-lit, causing scenes to play a bit darker than would be most visually potent. This visual tone can also suggest more deviance and taboo busting activities than what we see unfold.