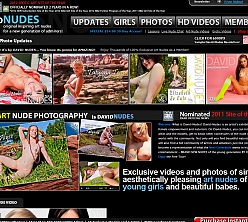 At some point in the early days of adulthood, David Weisenbarger must’ve looked at his landscape photographs and thought “If only there was a beautiful naked woman cavorting around this picturesque panorama...” Running with that thought in a way most men rarely bother to, David launched David Nudes, a site devoted to erotic depictions of the female form set amidst some of the loveliest natural settings we’ve yet seen. Also moving into the studio for more control and greater creative freedom, David’s work has long been some of the most impressive erotica on the ‘net, and even with so many competitors racing to offer the highest resolutions, most dynamic HD videos, and prettiest, sexiest models, David Nudes is still delivering with style and sensuality.

Pros:
David Weisenbarger is one hell of a photographer. Sure, he’s not exactly a Man Ray or a Weegee but he does manage to consistently capture evocative, erotically charged images of the beautiful female physical form. David’s models are all gorgeous young women with slender bodies and inviting eyes and, man, does he shoot them perfectly!

Not only is the content of high artistic quality, but the photo and video resolutions available at David Nudes are fantastic, too. Photos now reach three resolutions - 800x533, 1600x1067, and 5616x3744 pixels -  the larger of which look simply incredible. Videos, too, come in fantastic formats, peaking at a 1920x1080 pixel (a.k.a.: 1080p) WMV that offers stunning clarity and definition.

A new photo gallery is added to the already large exclusive collection (approx. 1,550 galleries, 550 videos) every day; videos arrive less frequently, about once a week. This all seems pretty appealing, right? Well, now with a discount bringing the down to $14.88 for the first month of access, it’s clearly even more so.

Cons:
Some of the photoshoots can be very repetitive, often even going so far as to spread images from the same shoot over multiple galleries, presenting each one as a new unique update. Models such as Alexes and Mary can be scene making undeniably similar poses in essentially the same location in at least three galleries.

Each video is accompanied by a rather bland and uninspired music track that detracts from the vivid sensuality of the models. Wouldn’t it be better to hear the girls moaning and breathing as they pleasure themselves and each other instead of a bunch of muzak crap?

David Nudes’ video pages are unfortunately afflicted with a rather crummy design that throws an obnoxiously large number of suggested scenes and galleries underneath the one you’ve selected for viewing. Very distracting and mostly unnecessary.