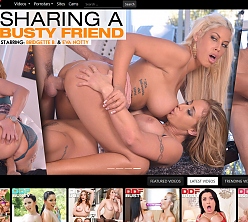 Pros:
DDF Busty is the brainchild of Denys Defrancesco and his DDF cohorts, and it presents an impressive roster of super-stacked beauties from about the world. Notable names (and chests) that’ll soon have you busting nuts over and over include Krystal Swift, Ania Kinksi, Gabbie Carter, Jasmine Jaem Cherie DeVille, and Sofia Lee.

Updates land at DDF Busty once or twice a week and bring the usual slate of High Definition videos, both streaming and downloadable, to your screen. Adding huge value to a DDF Busty subscription is the recent shift to 4K Ultra-HD videos so rich, detailed, and vibrant you’ll soon be involuntarily pursing your lips for a nipple sucking fantasy daydream.

Cons:
If you’re a stickler for authenticity and refuse to beat your meat to surgically enhanced breasts, DDF Busty may be just a little too artificial for your liking. There’s plenty of models here who show off their marvelous natural curves, but there’s also a heavy dose of inflated tits that defy gravity and just might not do it for you.

The multi-site DDF Network may include DDF Busty among its ranks but those who join this site don’t automatically receive any bonus network content or passes. It would be great to see the DDF Network push a little further and offer a little more to its subscribers, and to those subscribing to its sites on an individual basis.

Conclusion:
Has anyone ever tired of tits? With tantalizing boob-focused smut from the likes of DDF Busty available, it’s hard to imagine any devoted fap-fiend running out of steam. The awesome chests of DDF Busty’s models are matched by DDF’s own style and delivery, which brings viewers ample detail without losing a sense of smooth sophisticated that doesn’t only come in the form of lacy lingerie. There’s plenty of breast obsessed action in the sex itself, though some scenes slip by without so much as a moment of mammary sandwiching. With no bonus access to other DDF Network sites, taking DDF Busty as a standalone site may not suit all viewers. If you’re after more than what this site alone can offer, grab a DDF Network subscription. If you’re all (and really only) about “dem titties” then go hog wild with DDF Busty, it’s fine as can be.