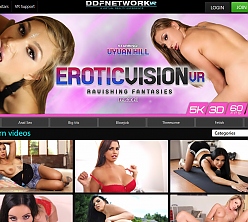 Pros:
DDF is well known for its wide range of smutty hardcore content but this, its first standalone VR site, might have even longtime fans concerned. The DDF house style can feel a little artificial at times but that actually works out quite well here. With VR productions being highly cultivated and carefully crafted, the DDF style works to make each exclusive encounter a reliably lusty, lascivious, and fun affair.

Image quality at DDF Network VR continues DDF’s trend of setting itself high standards then hitting the mark the vast majority of the time. 4K videos tailor made for Oculus Rift and HTC Vive use, as well as HQ and HD versions for PS VR, Daydream, Samsung Gear, and smartphone playback, bring clear, dynamic 180 and 360 degree virtual sex experiences to your sensory inputs.

DDF Network VR isn’t the most active of DDF sites - nor the most active of VR sites, I guess - but it does deliver another new encounter every seven-to-ten days, adding another available notch to your virtual bedpost and another epic encounter to the small but potent collection already brewing here.

Access to said DDF Network is not included in DDF Network VR membership packages, making this arguably the most misleading title of all DDF websites. Left with 98 VR scenes to devour at a leisurely pace, hungrier fans may rip through the collection too quickly for their liking. More than two guaranteed updates per month would really fill out the small site nicely.

The DDF empire may offer uniquely sexy thrills, but it doesn’t exactly lay it out in the slickest, most current style. Web design can feel too cluttered, the crucial info held off until you’re about to hit Play on a scene. Keyword tags, the model index, screencap previews… all of these elements could be significantly improved.