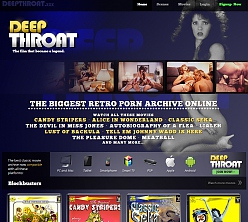 The stars of Deepthroat's curated archive include many legendary adult performers both female and male. From thick-dicked 70's studs like Harry Reems, Ron Jeremy, and John Holmes to the women that had the world standing to attention: Linda Lovelace, Seka, Kristin Powers, Amber Hunt, Asia Carrera, and Vanessa Del Rio.

Cons:
"Scenes" are merely specific points on timeline of full-length movie and when selected simply start the movie playing at the beginning of your chosen scene. While this doesn't mean much to streaming viewers, downloaders are forced to download the entire film in one file and cannot download individual scenes.