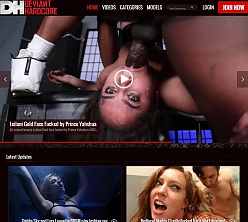 In order to convince viewers that Deviant Hardcore is both substantially deviant and defiantly hardcore, High Definition videos are online and ready to be downloaded or streamed from your browser window. Resolutions reach 720p and 1080p either way, offering consistent HD quality throughout the archive.

Compared to the nearly 70 videos online, the Deviant Hardcore photo archive, which stands with just eleven galleries, remains in dire need of attention. When they're available, galleries bring another side of their paired scene to your screen, grabbing glam-tinged tease and introductory shots before heading in for juicy close-ups. It'd be great to not only see more photos online here, but online in higher resolutions than a 1600px peak.

Windows users and extremely picky video fiends will be displeased to find only MP4 videos available at Deviant Hardcore. The MP4s stream smoothly and offer no problems when played locally, but variety of format would no doubt give more viewers more options with which to satisfy themselves.

Updates do not appear to be held to a strict schedule, instead arriving whenever the hell they damn well please! You'll see as few as two days pass between new episodes, or as many as ten. A tighter, more regular schedule would do wonders for members' confidence. May I suggest the standard weekly installments?