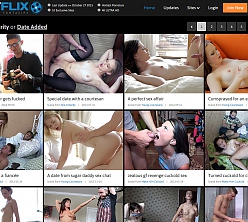 You love the look of Dirty Flix and want to sign up? If so, you'll see a new scene drop every two days while also enjoying the nearly 500 scenes already available here, organized by site and searchable by site, performer, sex act, and other featured content.

Cons:
Dirty Flix hosts sites of both European and North American origin and, as a result, features English and non-English dialog. Much of it in German with added English subtitles, the spoken parts of a given scene can be more awkward and uncomfortable than usual, and even worth skipping.

Some of the Dirty Flix websites aren't exactly overflowing with content: Mom's Passions, Disgrace that Bitch, and She is Nerdy hold just 11, 21, and 34 scenes respectively, far from enough to have fans wide-eyed, drooling, and grinning while reaching for their zippers.

With only one Dirty Flix site managing to produce the promised 4K Ultra-HD videos (Fucking Glasses, somewhat ironically), the rest of the network is peaks at 1080p. Sure, the 1080p videos still look great and offer crisp, clear images, but there'll be many members pissed at the absence of 4K.

Advertising is not just present at Dirty Flix, it's almost overwhelming. Sitting at the top and bottom and left-side of every page, banners and other graphic ads show similar models to those featured here, confusing browsers and no doubt leading many to unintentionally head to another site requesting money for pussy pics.

Conclusion:
Dirty Flix gathers together sites devoted to sensual erotic hardcore, devastating humiliations, stolen hidden camera voyeurism, phoney modeling auditions, cuckolded husbands, and much more, wrapping them in a convenient package that delivers some dynamite content but also seems to be plodding along somewhat. Home to a growing collection of 479 videos and nearly as many galleries, Dirty Flix and its range of styles and sexual scenarios makes a much more appealing package than the sites would on their own. Video and photo quality does vary from site-to-site, with only Fucking Glasses providing the promised 4K Ultra-HD formats, but the A/V standard is generally high throughout the network. A new scene lands here every other day, keeping the fairly small sites growing and making a wonderful showcase for new and rising Euro and US talents both in front of and behind the camera.