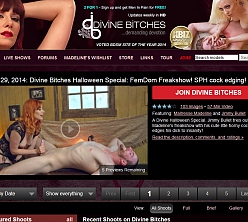 Overview:
The loss of one's faith can be a devastating experience. Sorrow and loss can turn even the most devoted religious person into a downward spiral of unanswered questions, rage, and rejection. The perfect replacement for your preferred flawed deity can be found right here, of all places, under the hundred-year-old roof of the San Francisco Armory. Working for Kink allows women like Maitresse Madeline, Lorelai Lee, and Cherry Torn to take charge of weak, sissified, downright pathetic men in need of severe discipline. Madeline and her fellow dommes restrain, abuse, command, and torture their slaves in dungeons, prison cells, lounges, and dining rooms, plugging their asses, prodding their prostates, and bringing them extremely close to orgasm only to ruin the excitement with a swift punch to the scrotal sack. The results are among the most intense Kink has ever produced. With the focus firmly on demeaning and abusing men, some viewers will find Divine Bitches a bit too much. Others, though, will throw down the monthly $29.99 fee and indulge their wildest submissive fantasies under the tutelage and guidance of Kink's preeminent female slave-drivers as only Divine Bitches allows. Kink is a unique and endlessly exciting place to while away those lonely hours (or to introduce to a friend), but when you're enjoying a Divine Bitches ball-busting scene, you're never truly alone. May the Divine Bitches be with you!

Pros:
The Divine Bitches of this site's title include Lorelai Lee, Cherry Torn, Bella Rossi, and Aiden Starr, all of whom verbally and physically punish and abuse the guys they have tied up at their feet. A pregnant Gia DiMarco makes her milkman pal worship her bulbous belly while chained. Maitresse Madeline leads the group of dommes and performs most often; she makes quite the impression, too!

Shot and delivered in High Definition video formats, Divine Bitches looks great even with sets usually under-lit. At 720p resolutions, streams and downloads offer equal clarity and definition, while photo galleries (of which there is often multiple per scene) host strong images at 2400px online and zipped sizes.

Home to an impressive 242 exclusive female domination scenes - seriously, you won't find this smut anywhere else - and adding another kinky man-beating, woman-worshipping episode every week, Divine Bitches has a plentiful supply of what you're after. Throw in free access to another Kink site, Men In Pain, and you're looking at a pretty sweet deal.

Cons:
Access to the bulk of Kink's extended network is not included with Divine Bitches membership. Instead, you're forced to see previews, teasers, and links to inaccessible content filling the pages of Kink's various sites. You're free to roam Kink's network, viewing nothing but previews, but that's more of a tease than a legitimate bonus, don't you think?

Divine Bitches looks almost exactly like Kink's dozens of other sites. So much so, in fact, that you can very easily end up wandering off and landing on another site without really noticing it. By turns confusing and disorienting, Kink's navigation system allows you to get lost quite easily. Perhaps it was designed that way in the hopes you'd not be able to resist more than one Kink subscription.

Looking quite good in 2400px frames, Divine Bitches' photo content doesn't absolutely need an upgrade, but it certainly wouldn't hurt. Videos peak at 720p and are outclassed by the 1080p offerings of many other sites. Perhaps an upgrade to both photos and videos is in order.