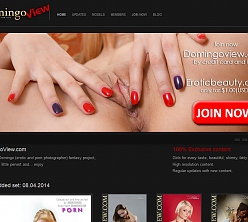 Pros:
Whatever can and will be said of his Domingo View website, let it never be claimed that Higinio Domingo doesn't know his f-stops from his high-speed motor drive shutter systems. The photography on display here doesn't just capture the models in seductive states, it captures their physical forms with ample detail in very clear and inviting images.

With photo resolutions reaching both 900px and 3000px, it's unlikely you'll find yourself wishing for greater detail. Skin tones, the various shades of hair, and especially vivid eye colors are captured beautifully in galleries while videos reach HD resolutions of 1080p in MP4 files. Videos can be streamed or downloaded.

Cons:
When streaming Domingo View's videos, viewers will have to content themselves with missing a slice of the action: the stream window cuts off a horizontal strip of video along the bottom of the frame. To see the whole image you'll have to download the only provided video option.

Sporting an extremely basic design, layout, and navigation system, Domingo View won't be mistaken for a cutting edge leader of Internet pornography. It's a simple affair, this site, and it both looks and acts in a way recalling the late 90s more than the advanced sites of today.

The models might look good, even great, in these galleries, but their profile pages leave much to be desired. Devoid of all but the most basic (and boring) info, the profile pages do little more than link you to your chosen girl's online content.

With a very small archive of only 11 videos and 66 galleries, there's really not much going on at Domingo View and it'll be a while until that's the case. Updates are not posted with attached dates and no schedule is clearly in play, leaving members with many unanswerable questions about Domingo View's future.

Conclusion:
Higinio Domingo does some very fine work, but behind the camera, not in the construction of his website. Domingo View suffers from a bland design, a clumsy layout, and a lack of browse and search tools. And with video streams obscured by controls, only one downloadable video option, no zipped photo galleries, and updates that arrive with no date information and leave members wondering when the next is due, Domingo View clearly has some work ahead of it should it want to increase its membership. The imagery is, however, bordering on world-class; it might not be as strong as some of Domingo's work for prominent adult studios, but it's getting there. In time, Domingo View should be a key independent part of Europe's online erotic art community. Today, though, it still has much to prove.