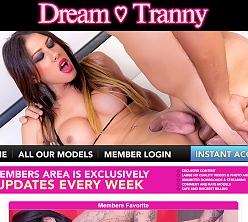 Pros:
The trans-performers of Dream Tranny unveil their curvy, feminine figures before whipping out their cocks and showing us what they're made of. Notable babes featured here include dark-featured Brenda Lohan, Victoria Carvalho, Yasmin Fontes, and Thay Tavares, spunky blondes Carol Penelope, Barbara Perez, and Bruna Rubio.

High Definition videos were once unthinkable in the woefully undervalued trans-porn arena, but now… Dream Tranny delivers all new episodes with 720p and 1080p videos ready for download. Although streams are limited to 480p resolutions, downloads look very good and offer strong views of the sordid, sexy-as-fuck action. Photo galleries are also good-looking with 2000px frames, online and zipped.

Dream Tranny usually prices access to its members-only area at $19.99-a-month but thanks to Mr. Pink's devotion to discounted smut, you can now enjoy all Dream Tranny has to offer for $14.99 - a tidy savings indeed! The online archive is set to upload its 100th scene any day now as part of the weekly update schedule. Dream Tranny, it seems, is just getting started.

Cons:
There's very little information provided alongside the video and photo updates made to Dream Tranny. Keyword tags, model profiles, and scene synopses are all completely absent. A major design, layout, and navigation overhaul will only become more necessary as Dream Tranny grows past the 100-scene mark.

Sitting at 480p, Dream Tranny's video streams are about half the size and quality of the 1080p High Definition downloads. It'd be awesome to return to Dream Tranny and find all streams available in at least 720p one day. Similarly, although the 2000px photos are quite good, there's room for modest improvement there too.

Conclusion:
Dream Tranny aims its hardcore treats at a T-girl loving audience and since said audience is growing there's only going to be more attention thrown this site's way. With little information about its content provided for members - no model index, no scene info etc - it's going to be hard to make a compelling case for multi-month membership unless you're a die-hard trans-porn fiend in search of Latina-focused fucking. Even then, with less than 100 scenes in the main collection, Dream Tranny isn't exactly destroying the competition. High Definition video downloads help matters with 720p and 1080p clarity giving great views of the super-deviant sex. Threesomes aplenty and ample double-anal means those who like it harder than hard are well catered to. This is not the most sophisticated take on trans-porn but Dream Tranny is certainly not without its charms.