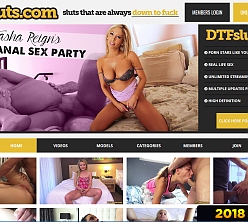 Overview:
When we’re young, hiding unwanted boners from classmates and daydreaming about teachers in sundresses (or foxy female X-Men, I guess), we one day hope to find ourselves knee-fucking-deep in such a splendid variety of women that satisfaction is too small a word for what it brings. Some guys become musicians, others bankers, others cops, and most of them do it hoping to score more pussy than Frank Sinatra. James Deen, the controversial cocksmith, pulled it off and now (still) has women literally filling out forms online in order to hole up in some hotel and take his dick in two, maybe three holes for a few hours. With every one of these meetings captured on film for DTF Sluts, Deen and company deliver a powerful barrage of illicit semi-pro sex tapes. With plenty of top-ranked pornstars also flocking to fuck Deen and his homies, DTF Sluts provides many wonderful sights for those that want to see their favorite stars in lighter (or no) makeup, getting dicked down like the super-slutty girlfriend or fuck buddy you wish you had. At $29.99, monthly membership to DTF Sluts promises all the HD hardcore hotel-room romps you can devour in Deen's well-established style and makes for an intriguing offer from porn’s former boy next door.

Videos now stream in crisp, clear 1080p HD videos and can be downloaded in multiple resolutions, the best being 720p and 1080p HD MP4s just as impressive as the streams but playing even smoother locally. Many scenes are shot at night either in hotel rooms and apartments, or outside beneath city lights and moonlight. Others are cast in the garish hues of fluorescent lighting, while others are very smoothly shot and warm.

Each new episode of the Adventures of James Deen’s Pussy Posse hits DTF Sluts six days after the last, adding another to the 140 already sitting here looking pretty in HD. No bonus website access has been provided - a missed opportunity and a shame for members - but DTF Sluts has teamed up with Mr. Pink’s to offer monthly access for a meager $19.95.

Cons:
Devoid of photo galleries, DTF Sluts is an entirely video-only affair. (Well, weak screencap galleries aside.) With these scenarios being so realistic and date-like, it’d be great to have some snaps from the hangout-and-flirt period as well as some shots sent between parties digitally before meeting up. (A visual depiction of their agreement, flirtation… and probably nudes.)

DTF Sluts hosts plenty of older content taken from JamesDeen.com. It’s not being presented here as new and simply sits in the DTF Sluts archive as appropriate content. These duplicate updates still can be found at JamesDeen.com, too, so they haven’t been moved but copied. It’s always a shame to see sites padding their archives, but, what can I say? This works for me… he says as he reminds himself of what an epic DP Deen and Toni Ribas gave a newbie Janice Griffith way back when.

Although a solid array of download options are provided (assuming you’re okay with MP4s and MP4s alone), DTF Sluts doesn’t offer streaming viewers any options at all. Well, none aside from your usual Play, Pause, Fast Forward, and the like. Forcing all streaming viewers to load 1080p HD videos is a huge misstep and one likely to tick off a number of users now that major Internet providers are enforcing data caps again.

Conclusion:
Another of James Deen’s new ventures - others include Analized and Bang Casting - DTF Sluts manages to prove he’s still a master of sex-tape-style hardcore just as steamy when shot with sexy semi-pros and online applicants as it is with A-and-B-list pornstar beauties. Often shooting his partners with little or no makeup in everyday situations that play out like a believable fuck buddy or girlfriend experience, Deen has produced plenty of excellent (and definitely hardcore) smut here. It does get pretty damn intense from time-to-time, something not all viewers will appreciate. Spitting, slapping, and the forcing of fingers (and toes!) into someone’s anal cavity isn’t always the most sexy choice of action for a scene and Deen can dwell on that shit too long. Sadly, the scene synopses are uninformative and poorly written; images are you best decision-making aids here. The excellent 1080p HD videos can be downloaded or streamed and, while it’s unfortunate streamers have no other choice but to wait for a long-loading 1080p vid, all will be very pleased with the quality. A well-stocked site now updating every six days, DTF Sluts could stand to offer its supporters access to some of Deen’s other online efforts, but it’s a tidy, if not essential, online package of everyday perversity as it is.