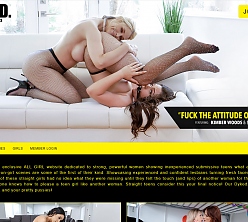 Learning how to love when you’re a hormone-addled teen or twenty-something with little in the way of true sexual experience can be a real chore. It certainly helps to have someone guide you around the world of eroticism and sex, and at Dyked, an all-new all-female site on the Team Skeet network, older women show younger girls the ropes, teaching them the art of lesbian lovemaking in all its myriad marvelous ways. Delivered like all Team Skeet smut in 1080p HD streams and downloads, the visual splendor of Dyked comes second only to its cast, a true compendium of porn’s most accomplished and promising lesbian performers.

Overview:
Certain words fall out of favor for political reasons, the most obvious being that odious “N word.” The term “dyke” was once used freely to identify a lesbian woman but that usage tapered off as LGBTQI rights advanced into the mainstream discussion and folks decided, hey, it’s probably a good idea to stop insulting random strangers left, right, and center over something they had little to no choice in. Then along comes Team Skeet and threatens to ruin all this social advancement with a brand new site devoted entirely to girls loving girls. Dyked offers HD streams and downloads capturing “strong, powerful women showing inexperienced submissive teens what a real lesbian is.” Uh, yes please! The lusty and learned likes of India Summer, Syren De Mer, and Sarah Vandella show young starlets Avi Love, Gracie Green, and Angel Smalls how to eat pussy like a pro, the steamiest scissoring techniques, and the joys of three-way and group sex that never, ever includes a human male penis. Dyked offers High Definition video streams and downloads galore, each episode showcasing a steamy female couple filthying up an everday domestic situation, and presents an awesome angle on Team Skeet’s latest developments. As part of this awesome, infamous porn network, Dyked has a stable foundation from which to propagandize the virtues and values of lesbianism to a worldwide audience of, ironically, mostly men.

A new scene may only land at Dyked once-a-month, but the growing archive and the extended Team Skeet network access all members receive will keep even the most ravenous devourer of hardcore smut lesbian or otherwise loaded with more than enough to keep them entertained and aroused for ages. Discounted to a measly $14.87-a-month, Dyked is also a dirt cheap entry point into this awesome network.

Members of this all-female fuck-a-thon may find themselves wandering the Team Skeet network between Diked installments. After all, updates only land once each month and the archive holds just 58 scenes at present. Thank goodness for Team Skeet access or Dyked members would be left seriously wanting.

If you’re the kind of viewer that likes some immediacy to their sexual entertainment, Dyked may not cut it for you. Often taking half the video to establish a steamy atmosphere of lust and seduction before, say, sliding a finger into a moistened snatch, Dyked can seem like it’s half build-up, half- sex. That might seem uneven to some viewers and it’s easy to see why.

Conclusion:
Shooting some of the steamiest all-female content ever seen one a Team Skeet site, Dyked brings together the most salacious performers from both the teen and MILF categories, thrusting them into steamy lesbian lovemaking lessons that don’t just leave them more skilled at eating pussy than before, but leave you reeling from the incredible sights and sounds Dyked showcases. In rich 1080p HD streams and downloads, videos offer strong visuals and clear audio that captures perfectly the loaded dirty talk and verbal coaching offered by the elder ladies. Dyked is a hell of a lot of sordid sapphic fun, that’s for sure, but it could do a lot better than single monthly updates. The 58-scene archive isn’t exactly overflowing with lesbian encounters, though there is a good selection online and the Team Skeet network access makes it all a whole lot more easily digestible. If you’re eager to explore the further reaches of lesbian sex and have a fondness for Team Skeet’s style, Dyked is undoubtedly a fun romp through porn’s collective panty drawer. For maximum satisfaction, simply adopt the mindset of the elder Dyked women: don’t expect absolute perfection every time and you won’t be disappointed.