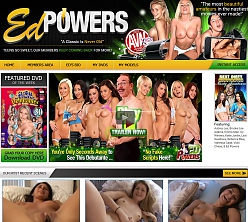 Ed Powers has been picking up amateur sluts at bus stops across the nation since the waning days of the 1980s. Now online at his self-titled website, Powers brings a huge exclusive collection of original amateur-fucking smut to your screens. Can this legend of yesteryear continue to impress in today's tech-savvy and forward-looking adult industry? Are Powers' amateur movies still as hot as they were back when Nirvana's Nevermind played from every the multi-CD changer in every bedroom and the only reality television was the work of Ed Powers appearing on your CRT TV? Let's meet the man, his ladies, and find out for sure.

Although Ed Powers has banged hundreds, if not thousands of amateur sluts over the years, the pros often stand out here in some of their earliest hardcore work. In fact, Justine Joli's sole hetero hardcore scenes is here, as are thrilling turns from Zuzana, Flick Shagwell, Emma Mae, Bethany Benz, and Sarah Shevon.

Along with the main content archive or nearly 1000 scenes and 49 photo galleries, Ed provides his members, who now pay only $19.95 for their first month of access, with access to archived episodes of his radio show, blog posts, a video-on-demand service, and a wealth of third-party bonus videos.

Ed Powers provides his members with 1024px photo galleries and 360p MP4-formatted movies. Neither of these content types proves especially attractive with videos in particular looking terribly dated and way past their use-by date. If you're devoted to low-res, lo-fi amateurish smut from the 90s, this site will impress. If not, it will likely disappoint.

Take a look at Ed's snarkily grinning face and try to keep your dick as hard as it was a moment ago. Go on, try! Not easy, is it? Ed's doing some solid work and has done for years, but plastering his face over every page of his site isn't one of his better stylistic choices, that's for sure. Or, if it's obnoxiously large watermarks that threaten the saucy visuals otherwise at your disposal, you to had better watch out.

If you're seriously considering a stint inside Ed Powers's exclusive hardcore site, why not try before your buy. A trial membership offering three days' access for $4.95 is helpful but also limits your viewing to streaming videos only. There's also a pre-checked offer that signs you up for a Total Video Pass membership unless you deselect the tiny box below the Powers payment plans.