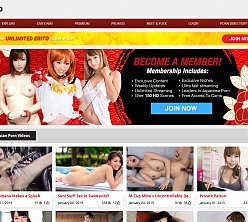 Whatever the word “Erito” means - and I have to assume it has roots in “eros” or “eroticism” - you can be sure from just a minute looking at the site of the same name that your fondness for Japanese porn has finally been combined with your insistence on fully graphic, uncensored sex. The exclusive Erito archive brings the boldest and most irresistible JAV stars to your screen in rich High Definition streams not to be found elsewhere. The site isn’t without its problems, of course, but with few reliable uncensored sources of Japanese smut around, you’ll want to pay close attention to what the mysterious Erito has to offer today’s JAV fan.

Overview:
Japanese porn isn’t just as staple of online adult entertainment, it’s a staple of culture-clash comedy, Western moral condescension, and, well, 4chan. Known worldwide as a powerhouse of Japanese pornography, Erito brings its members a selection of exclusive hardcore encounters with more than a few truly special features. Obviously it’s the models that are most likely to entice new fans into signing up for a $29.99 monthly membership, but it sure doesn’t hurt that Erito offers 1080p HD online viewing and a totally uncensored experience. That’s right, weebs, at Erito you get to ogle every inch of Japanese flesh - and the pinkest bits, too! - that the censors usually manage to obscure, leading to everyone’s main gripe about J-porn. Could it be that Erito finally smuggled out an archive of exclusive Japanese hardcore the censors couldn’t touch? Was this smut produced somewhere those laws don’t apply? Quite frankly, who cares? Let’s just peel open this pornographic megapack of your favorite flavored Pocky and chomp away before Erito grows stale!

Some very strong visuals help showcase the sexual variety of Erito’s archives. Streams show up in 720p and 1080p resolutions, coming through clearly and, in most cases, with clear detail and color. Best of all, Erito’s content has been snuck past the Japanese national censors and remains (from what I can see) completely uncensored and free of pixelated genitals!

Erito holds in its archives just over 100 scenes of hardcore Japanese sexual degeneracy, and according to its posted dates adds another roughly every three or four days. Though that quantity still seems a little light, Erito sure seems devoted to delivering uncensored hardcore JAV smut to the masses!

Cons:
Erito has been online some form or another for at least five years and at some point ditched a whole load of content. It does appear webmaster dumped the nonexclusive material in favor of keeping Erito entirely exclusive but that shaved the size down a huge amount. Without any bona content feeds, or website or network access, Erito won’t satisfy the more gluttonous users for long.

Many videos show no apparent change in quality when you select a different resolution. It may be the case that the majority of Erito’s scenes are actually offered in only one resolution and bitrate, labelling be damned. Some do look crisp and clear enough to be 1080p, though they also could be convoking remasters. Without download access, it’s near impossible to tell.

Erito lacks basic navigation tools like a model roster, graphic category selection pages, or keyword tags. Without these tools, you’re left to wander the site rather aimlessly, sorting content by popularity or publication date. Performers are regrettably left unnamed in many cases while, in slightly more career-friendly updates, they’re named in the preview caption but nowhere else.

Conclusion:
Let’s face it: if it were censored, Erito could be pretty easily forgotten amidst the overwhelming mass of Japanese porn littering the Internet. Thankfully, Erito’s smut has evaded the censors and shows every millimeter of every juicy, creamy orifice that takes modestly-cocked pounding from some pervy Japanese gentleman. The hardcore sex on display offers variety and plenty of energy, many scenes delving into group sex, various fetishes, and light bondage. The models also satisfy a range of tastes and sexual interests, though it’s absurd to leave them untagged and nameless. What are we to do when we want to see more of their lively work? And there, friends, is the main issue with Erito. It’s as if this site were created to be the only JAV site you’d ever need, but only if your demands were limited to hot girls, hot sex, a modest archive and not a single thing more - no navigational bells and whistles, no model index or profiles etc. If your standards are a little higher you may want to entertain a better maintained (but still uncensored) JAV option. Just because they’re rare, that doesn’t mean you need leap into wth first one that comes along. If your sole concern is excellent uncensored JAV, though, Erito may suit you just fine.