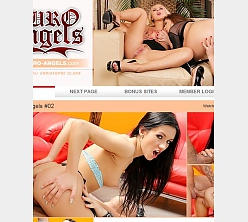 Those of us who feel stuck at home in the USA might see Europe as many things - a place of old-world adventure, a haven for history buffs, an art lover’s paradise, a change of scenery - but anyone reading this here review is likely to think of it also as a cornucopia of incredibly lusty, beautiful women. Euro Angels’ head honcho, Christophe Clarke, has gathered a great roster of Euro hotties (and a couple of incredible American babes) and enticed them to act out your deepest, darkest hardcore fantasies in front of his HD cameras.

Many new Euro Angels scenes are delivered with multiple streaming options, the best of which is labelled “HD” and appears to be just that. These streams come through very clearly and sound great, too, which is extra cool considering all the crazy accents filling the soundtrack.

Already hosting over 400 scenes, Euro Angels updates every four days. If that’s not enough, members also receive bonus access to the entire network of 18 websites. Mr. Pink’s readers can also sign up at the discounted monthly rate of just $14.95.

Cons:
Although the tour page promised “hi-res pictures available for every scene”, the only image galleries currently available appear to contain screencaps taken from the videos. What gives, Mr. Clarke? Couldn’t have an extra guy on set snapping some real photos? I would have volunteered.

Not all newly added scenes are new productions and many are delivered without High Definition streaming options, leaving viewers ogling a less-than-stellar stream or download that looks quite out of place among the newer, better content.

None of the newer, HD-enabled Euro Angels scenes offer downloadable versions of the High Definition streams. Downloaders are stuck with 720x480 frames and the occasional 960x540 video, which can’t compete with the gorgeous streams. Hopefully a network-wide HD revolution will soon replace these somewhat lackluster downloads.

Conclusion:
For fans of European-pornstar-starring hardcore porn, it doesn’t get much better than Euro Angels, especially if you’re an American with a Euro fetish. In the opinion of this reviewer, having Bobbi Starr and Dana DeArmond on board to take you on a tour through the most decadent aspects of European porno-sexuality just makes this site all the more accessible. The HD streams provided with most new scenes look fantastic; we can only hope downloadable HD videos make their way online soon. Updates arrive relatively frequently and add to the already large archive of semi-exclusive content (some scenes and movies are licensed to other online distributors) and Mr. Pink’s readers can sign up at half-price and received free network access, to boot. Come on, why not indulge in some Euro Angel deliciousness?