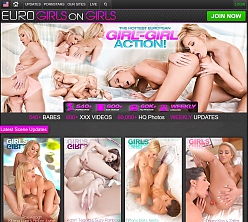 Here in the USA, it's hard not to envy the legendarily loose-moraled Europeans, what with their indulgent alcohol consumption, tendency toward political revolution, and openly expressive sexual character. Euro Girls on Girls shows what we Americans might find the most enviable of all European sexual stereotypes - and there's not a penis in sight. Euro Girls on Girls is Denys Defrancesco's showcase of lesbian hardcore sex. Ready for viewing in High Definition and now Ultra-HD formats, the DDF style captures sapphic love and lust with incredible clarity and sees Europe's top female performers at their very finest.

Overview:
Europeans are known for having a more expansive, open-minded attitude toward their own sexualities, putting the commonly held perception of Americans, Australians, and even the Japanese to shame. The foundation of all European sexual stereotypes - the Latin lover, the gifted French fellater, Czech women as into each other as they are you - the mating habits of Continental women are often the focus of adult entertainment. DDF Network's signature all-female site, Euro Girls on Girls, contributes to this global pool of experience with a bevy of scenes detailing the sapphic activities of Europe's finest young pornstar talents rendered not only in High Definition videos, but now in astonishingly detailed Ultra-HD episodes more visually rich than most galleries in The Louvre. Can this site from legendary pornographer Denys Defrancesco deliver all the lesbian interactions your fevered fantasies have conjured up. Getting inside the lesbian lover paradise that is Euro Girls on Girls costs you $29.99 per month, but with Mr. Pink's on the case, it's almost a certainty that you, dear reader, can sneak inside for even less and indulge all your wildest Euro-fetishizing fantasies with Euro Girls on Girls.

Far from the largest DDF website, Euro Girls on Girls is a more modest effort that still holds a strong 670-scene archive. New scenes land here every week, on Sundays, usually bringing both photo and video items, sometimes focusing on one or the other. Housed on a well-designed site with good navigation options and now discounted by Mr. Pink's to just $9.95, Euro Girls on Girls is tantalizing, to be sure.

Cons:
Naturalism is not a common feature of Euro Girls on Girls, where fantasy is prized and glamour is mixed in with even the most sordid girl-on-girl activities. Denys Defrancesco's photographic style can leave his models a looking rubbery with waxen skin, super-heavy makeup, and an exaggerated performance style that often detracts from an otherwise steamy arrangement.

Most DDF Network websites now boast 4000px photographs that rival the best in Euro-porn for clarity and quality. Unfortunately it seems Euro Girls on Girls hasn't been included in the latest photo overhaul and upgrade. Still sitting at 2000px peaks in most cases, this site and its photos could use a little nudge to even higher quality.