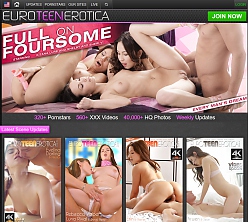 Overview:
Not only is the European continent the origin of many slang terms for sexual acts - the Spanish, French, and Greek all have popular sex 'styles' named after them - it's also home to a historical appreciation for virginal women having freshly entered full and absolutely legal adulthood. This fondness for fillies continues under the ever observant gaze of internationally acclaimed erotic artist (and hardcore pornographer) Denys Defrancesco. Part of the DDF Network to which Defrancesco lends his name and artistry, Euro Teen Erotica aims to fill your High Definition screen with more naked female flesh, as taut and smooth and youthful than any one man might desire. Does it accomplish such an ambitious task or does it fall as flat as so many other European entries into the 'teen porn' arena? Armed with nothing but a keyboard and a broadband connection, Mr. Pink aims to find out. Tag along as we peel back the tour page promises to reveal the truth lurking behind such boasts as "Weekly updates" and "Teen Fuck Every Way." Does Euro Teen Erotica still produce fresh content? Has it made the leap into 4K Ultra-HD territory or is it still languishing behind in 1080p? Euro Teen Erotica, your moment to shine starts right about… now.

A '4K' logo can be spotted on many recent Euro Teen Erotica updates and they tell no lies here, fellas. The site now updates with 4K videos ready for downloading at 2160p, the reliable 1080p format still your best streaming option. Those after super-high-res teen hardcore shot with a lush atmospheric style have certainly found it here. Even photo fans are well taken care of with 2000px shots online, 4000px in zipped sets.

Cons:
Shot in a significantly different visual style to most DDF productions, Euro Teen Erotica doesn't quite fit in with other DDF Network sites. Although it's great to see the often garish DDF house style toned down a little, some viewers will wish these teens were more consistently shot in a similar fashion. As they are now, the airy, white-washed visuals don't look much different from many other Euro teen productions.

Recurring at double the price of your first month, the super-low cost of a Euro Teen Erotica membership is a limited deal, a taste test, if you will. It only costs $4.95 to get you in the door, giving you the chance to find out for sure whether Euro Teen Erotica is for you or not without wasting your money. If you're the indecisive kind, the second-month bump to $9.95 won't suit you.

Conclusion:
As common as the style of erotic teen hardcore utilized by DDF for its Euro Teen Erotica site may be, few pornographers are as adept at capturing lush sensual encounters as Denys Defrancesco and this site is fine evidence of that. Holding a little over 600 scenes at present and adding one more every week, Euro Teen Erotica does indeed deliver what it says on the marquee, and it delivers it in fine audio-visual quality. Videos stream and download at 1080p as standard but reach 4K (or 2160p) and feature Virtual Reality views on special occasions. The 4K and VR archive is still quite small but the more-than-solid 1080p HD videos shouldn't receive many real complaints. Weekly updates bring a steady supply of new teen-and-young-adult starlets, all soft glowing skin and delicately tufted pussies to the already strong roster and showcase beautifully as they enjoy sex with male peers. It would be great to see DDF find a more unique style and viewpoint for Euro Teen Erotica, but as it is, it's still an excellent showcase of Europe's newest talents.