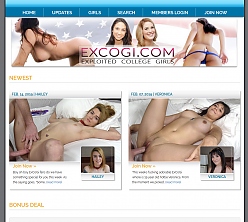 Many amateur hardcore sites suffer from low video quality or poor shooting, but not ExCoGi. A keen directorial style captures all the sexual shenanigans in clear frames and high resolutions peaking at 1280x720 pixels, streaming and downloaded. Although 720p seems a bit small these days, ExCoGi offers very strong visuals.

Occasionally another guy will step in to fill the absent TC’s shoes. So experienced is TC, though, that any other dude falls short, giving lackluster interviews and offering far less sexual chemistry with most of the women. The pairing of TC and another guy can run perfectly fine, though, as our main man still runs the show.