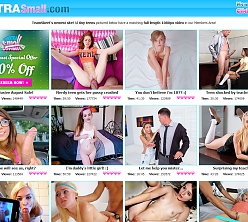 As any experienced world traveler well knows, the best woman to take on vacation is one that'll fit in your suitcase. Sneak her aboard low-security airlines to save ticket costs, have a bellboy carry your case to your hotel suite unaware of the moist-pussied little vixen lurking within. And, of course, slide your throbing cock into her tiny body and feel like a fucking Hulk or something! The tiniest pornstars working today have lent their miniature frames to Team Skeet and take a starring role at Exxxtra Small, where "tiny chicks fuck huge dicks" and let you watch every sordid second in brilliant HD movies.

Overview:
It has often been said that size doesn't really matter, it's the way it (whatever 'it' might be) is used that proves or disproves its effectiveness. For men, the idea that a smaller penis might nevertheless be enough for some women is enough to stave off suicidal ideation or reluctantly chosen asexuality. For small-framed women, however, being on the diminutive side has long put them on an erotic pedestal. After all, what makes a minor man feel more like a major than his dick seeming huge when inside a girl weighing less than 100lbs? Exxxtra Small is Team Skeet's attempt to convert you to a small-girl fan and its attempts are aided by stunning 1080p HD videos and high-res photo galleries showing the lusty likes of Chloe Foster, Gabriella Paltrova, Jancie Griffith, and Mr. Pink's favorite diminutive dynamo, Veronica Rodriguez in all their miniature glory. Charging $28.97 for regular monthly access but promising for that price a small-but-sexy platter of carnal adventures that see nosy little bitches get their comeuppance, cheating girlfriends get railed by their BF's buddy, and slutty step-daughters doing whatever they can to convince "daddy" to let them out late on Saturday night, Exxxtra Small sounds exxxtra fucking exciting and a vital component of Team Skeet.

The models look gorgeous in 720p and 1080p HD videos in streaming and downloadable forms, each one offering clear, colorful images in Team Skeet's usual style. Photo galleries, 'Best-Of' compilation videos, one-minute-clips, trailers, and screencap galleries are also on hand to give you plenty of great viewing options.

Exxxtra Small hosts women who satisfy despite their tiny size and the same could be said of the site's own archive. Holding 92 scenes, Exxxtra Small falls short of one hundred scenes but nonetheless leaves fans in good hands among the 27-site Team Skeet network. Mr. Pink's readers can now join Exxxtra Small for the exxxtra awesome price of only $14.87, a great offer!

Cons:
Seeing Exxxtra Small upgrade its photo content from the current 1620px resolution peaks would be absolute aces. Many other sites are routinely producing three, four, five, and six thousands pixel images, leaving Exxxtra Small and other Team Skeet sites in the dust.

Updates arrive on a rather odd schedule here with new scenes added weekly or fortnightly, alternating between the two. As a result, after more than three years online, Exxxtra Small still holds fewer than 100 scenes, is one of Team Skeet's smaller sites, and will surely leave members to wander the rest of Team Skeet's archives more than Exxxtra Small's own.

What teen slut couldn't benefit from a little discipline? The often aggressive sex and coercive scenarios of Exxxtra Small exploit the physically tiny girls - 'cause physical size dictates the power of your will, duh - and that's bound to rub some viewers the wrong way. Let me put it this way: I wouldn't go rushing to screen this smut for your girlfriend.

Conclusion:
Adult sites dealing with "small" girls often use that term to suggest barely legal ages. That's certainly the case here at Exxxtra Small, as well as across the Team Skeet network, and it might annoy or disturb those viewers more sensitive to such precarious issues. Everyone else, however, will be thrashing their dicks as they devour a small but dynamic archive of hardcore teen-fucking A/V delights. Updates are made on an alternating weekly/fortnightly schedule and members can only expect two-to-three new scenes each month. It'd be great to see this schedule revised and make properly weekly as Exxxtra Small is one of Team Skeet's better, more deserving one-on-one hardcore endeavors. The 1080p HD videos now online give you scorching hot views of the little minxes as they wriggle around and ride dick, slobber on sperm-spewing heads, and steady themselves on all fours before seeing how much long, thick man-meat they can take internally. Photos could use an upgrade, sure, but are hardly as vital as the videos. Exxxtra Small might not be the best site to show your lovely ladyfriend for some couples viewing, but it's a steamy, hugely arousing slab of teenage delinquency that's definitely earning its place on the great Team Skeet network.