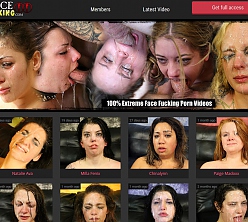 Pros:
It takes a brave and daring adult performer to shoot for Face Fucking, a site famous for its mistreatment of women and their fragile mouths, cunts, and egos. Recent appearances from Kimberly Chi and Laci Hurst have really upped the ante here, and the mix of girls (alt.girls, punks, athletes, chubby sluts, and girls-next-door) offers something for (almost) everyone.

Face Fucking may seem like a low-budget effort, but its crew has managed to produce some detail-heavy videos and galleries. Videos now stream in clear frames at 720p while available for download at that size, 360p, and 1080p. The highest quality video almost offers too much detail - care for a game of "What did she eat for breakfast?" mid-scene? - but that'll sit just fine with more deviant viewers.

Face Fucking sees weekly updates add another scene to the nearly 500 scenes already here. There's a good amount of variety among the archived episodes, too, with women both reluctant and eager to be abused. All video updates come with a photo gallery for added visual treats. And, if you're still hungry for more sexual insanity, the whole Adult Doorway network is included as a bonus.

Cons:
If you'd rather keep vomit, panic attacks, and uncontrollable sobbing out of your masturbatory diet, keep clear of Face Fucking. This is one of the most viscerally aggressive adult sites in existence and certainly won't suit those after a more mutually pleasing virtual-sexual experience. Face Fucking doesn't hold back even if it's models try to.

Although it's undoubtedly the premise of Face Fucking that makes it so intriguing, it's the women that make or break a scene. If you want degraded whores left in tears, you can find 'em. If you want tough dames out to test their limits, you'll find them too. What you won't find is any kind of model roster page or personal information about the models.

The Adult Doorway network on which Face Fucking sits is, at this point, barely what you'd call an active network. Only one of its sites, Face Fucking, is still adding new content. The others seem far too content to let their badly dated, low-quality archives sit there forever. The least Adult Doorway could do is create a new site or two sometime soon.