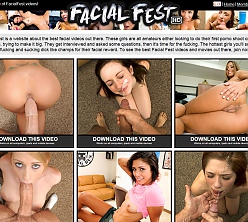 Bang Bros is one of the net's largest porn networks with 43 sites currently online. Of these sites, most people seem to focus on the more outrageous and irreverent ones, letting the quiet achievers pass by largely undetected. Facial Fest is one such quiet guy, but don't for a second think this 200-plus-scene POV site is anything less than brilliant. With an endless parade of new chicks lining up to receive a nice creamy pasting, each one shown in crystal clear HD that really makes it feel like you're on the giving end of the titular blastings, and consistent weekly updates to an already very impressive catalogue, Facial Fest is a guaranteed good time, even at a slightly slower pace than, say, the Bang Bus.

Pros:
Facial Fest has a simple premise: bring in the new girl, talk to her about her sex life and her new career choice, have her suck you off, fuck her brains out right there in the office, and then have her kneel in front of you and… splat! Ok, so it's not really you, but the POV shooting style certainly makes it seem that way. Everything seems to flow very naturally and most of the girls seem to have fun; just as you certainly will.

One of the most enjoyable aspects of Facial Fest scenes isn't the facials themselves - it isn't even a sexual act! The introductory chats are usually very informative and give you lots of opportunities to get to know, vicariously, the girl sitting before the camera. Sometimes this backfires and they become obviously uncomfortable, but the clothes thankfully cow off and reignite the flames of lust!

The 217 episodes already online at Facial Fest were added once a week, every week since March of 2008. Still arriving every Tuesday, Facial Fest's update schedule is as tight as the pussies it shows being plugged. Hell, it's tighter! Your membership doesn't just give you these 217 scenes, but includes the entire 43-site Bang Bros network as well. Now, at what price comes this pleasure? With Mr. Pink, a mere $14.95 per month.

Cons:
I know I ain't no Hemmingway - I'm not even a poor man's of James Frey - but the scene descriptions and titles here leave much to be desired. Check out these titles: Nice load on the face; Asian facial; New girl gets a facial; Pretty girl gets a facial; Two facials; Facial for the first time; Facial for big titty girl. They don't really give you an idea of what distinguishes one scene from all others and you'll soon start ignoring them.

Preston Parker may have been obnoxious at worst, kind of dickish at best, but he was clearly a pro when it came to covering girls' faces with his spooge. This new guy, whatever his name is, isn't quite in the same league. His interviews are less engaging and he stammers and stumbles his way through the introductions and when it comes to the end of the scene, his explosions are severely lacking in velocity, making Preston seem like a firehose.

Ads litter the entire Bang Bros network and Facial Fest is cluttered with plenty of them. Additionally, there are a ton of preview thumbnails luring you to scenes that, unfortunately, you won't be able to access since they're on sites only tangentially connected to the Bang Bros network.

The introductory interview segments of more recent Facial Fest scenes tend to take up an inordinate amount of time. If you've got a 30 minute scene, do you really want 17 or 18 minutes passing by without any oral or vaginal penetration? Didn't think so.

Conclusion:
With Preston Parker gone many have been wondering about the future of his lil' cyber-baby, Facial Fest. Well, while some of the changes since his departure are less than thrilling, this is still the same old Facial Fest we've known and loved all these years. The girls are still relative newcomers to porn, some only shooting this one scene, and they put on a very convincing performance as they suck, fuck, and take a dumping from our new host's pecker. The 2000px photos and the videos, beautifully rendered in High Definition, look great across the board, and since they're shot in a POV style that puts you in the proverbial hot seat, the scenes play right to you as if it was your dick exploding all over this parade of pretty faces. While the new guy certainly has some catching up to do, the weekly Facial Fest installments should solidify him as a competent face-blaster in not much time at all. Personally, I can't help but miss the intensity with which Preston would spooge all over these sexy greenhorn amateur girls; the new guy is less of a projective ejaculator and a little closer to a dribbler. Whatever your thoughts on Facial Fest's new director, host, and invisible star, it's impossible to deny how much fun this site is. Even on a lively, often wild network like Bang Bros, Facial Fest manages to make a very strong impression without any unnecessary bells, whistles, or gimmicks. Just hot girls fucking their way to cum-covered faces in glorious HD POV videos. That's pretty damn hard to argue with, wouldn't you say?