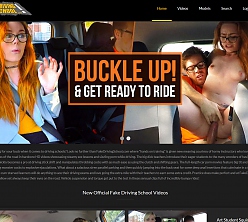 Running a driving school can be very rewarding work. You not only see students graduate and become responsible citizens unlikely to commit vehicular manslaughter but you just might end up more satisfied leaving work than leaving a date, especially if the student is anything like those of Fake Driving School. Faced with passing their test or simply not concerned enough to try, these slutty female students soon find that their teacher can be bribed quite easily. Some sucking and fucking and much filthy talk later, she’s on the road (and hopefully the pill) and her instructor’s behind the wheel again, headed for another lesson.

Overview:
The human species suffers about 1.25 million on-road and driving-related deaths every year, clear evidence that what’s needed, among other things, is better driving education and training. The folks behind one rather enterprising British company has taken it upon themselves to increase our collective road skills by forming a brand new driving school aimed at the busy, distracted citizen of today. Learn FDS doesn’t reveal the three-letter word in its name, at least not to its clients, the wannabe licensed drivers eager to get on the road and willing to do almost anything to pass their test. We, the home viewers, the subscribers to Fake Driving School’s online emporium of “amateur” backseat hookups, know however that the foxy young women, flirtatious MILFs, and other random sluts that enter a Learn FDS vehicle aren’t likely to leave without working up a sweat. Redheads, blondes, brunettes… Brits, Scots, Americans, Asians… The variety of FDS clients is as impressive as their skills with a different kind of gear stick. Hardcore fucking captured on GoPros and CCTV cams carefully placed inside the car is what Fake Driving School is all about and, make no mistake, it’s an excellent step forward from the Bang Bus imitators we’ve grown used to. At $24.99-a-month, it’s also a lot more reasonably priced than actual driving lessons!

Pros:
A driving school that only seems to take on attractive female clients (unless the boss lady’s on the job), FDS sees its instructor spending about fifteen or twenty minutes getting to know their client, finding out her needs and desires and any hindrances to getting her license. Whether she simply can’t be bothered to try or keeps failing her tests, or if she hits a tree and starts sobbing, the instructor and his eager dick are ready to arrange some kind of kinky deal.

Cons:
Long introductions, I can handle. Taking fifteen, even twenty minutes before a nipple is pinched, a tongue touches a cock, however, will certainly piss of plenty of viewers. Then there’s the cast… The guys administering most lessons tend to do a good job of the sex but can push things into silliness and stupidity a little too often. Some “dirty talk” is utterly laughable.

Fucking in a compact car is rarely easy and never completely comfortable but at Fake Driving School that can also be a problem for those watching along at home. Cameras are stuck on windows and dashboards and grab whatever shots happen to pass before them. Those after well-composed frames that highlight a womans physical features expertly won’t find such smut here.

Although Fake Driving School is part of a multi-site effort by its creators, those also responsible for Fake Taxi, Fake Agent, Female Agent, Fake Cop, and a few other sites dwelling in the car-sex, public-sex, and faux-amateur realms, they remain off limits. Standard Fake Driving School members do not receive bonus network access to other Fake Hub sites.

Fake Driving School completely lacks any kind of still images, no photo galleries or even screencaps. Watching the videos, I spotted plenty of great shots that lasted just a frame or two and lead me to believe stills pulled from the same cameras (or others similarly placed) would make very sexy mementos indeed.