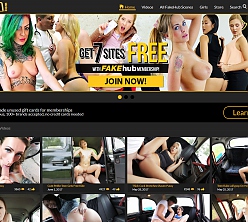 If your girl has been ditching the random assignments of Uber and Lyft of late and instead turning back to taxi cabs, there’s a chance her inspiration came from one of the UK’s most daring and controversial adult websites in recent memory: Fake Taxi. Chronicling the sexual adventures and antics of a lecherous and conniving taxi driver intent on fucking any attractive female passenger that flags him down. A bit enjoyable, and a little ridiculous, Fake Taxi is nonetheless a hugely entertaining site loaded with some very steamy backseat romps.

Overview:
Driving other folks from one place to another has since the arrival of drawn carriages has for well over a century been a common trade plied by men of modest skill set. Ride-sharing tech, a rough economy, and just a little arrogance and condescension has resulted in the taxi drivers of yesteryear fading into obscurity and obsolescence as Uber and Lyft ferry us to-and-fro. One enterprising British cabbie has developed a tech-aided angle all his own, one that might not always result in a larger paycheck, but at least leaves him spent and satisfied at the end of his shift. Meet the proprietor of Fake Taxi: seducer of fares, taster of assholes, and one of most flithy-mouthed perverts to ever drive on the left. Well, really it looks like there’s a few guys traipsing around London in search of foxy female fares that just might be a little desperate. Coercing some women into paying with something other than cash, giving some broke girls another option, but also pushing hard until he gets what he wants, Mr. Fake Taxi’s style won’t be to everyone’s taste, but those with a penchant for wild backseat sex, random hookups, and fetishistic verbal and physical play may find themselves in a brand new online porno heaven. Hosting “amateurs” with recognizable faces and serious skills, Fake taxi presents its content in 1080p High Definition hardcore videos discreetly shot from inside a custom-kitted taxi cab, adding a pervy voyeurism to everything it captures. Basically the British cliche of the trenchcoat-clad flasher, only with more positive reactions from the ladies, Fake Taxi is one very curious small business enterprise indeed.

Pros:
A taxi cab customized with numerous security cameras, microphones, and a secret stash and lube ’n’ rubbers drives around London waiting to be hailed by an attractive woman. Once inside the cab, she’s ogled and flirted with and eventually coerced or convinced to allow her driver a closer assessment of his passenger. Intense, sweaty, foul-mouthed sex often results and delivers plenty of raunchy heat in each episode.

Shot in HD and delivered to viewers in streaming and downloadable High Definition packages of 720p and 1080p resolutions, Fake Taxi looks pretty damn good for footage sourced largely from security cameras, playing smoothly and with clear sound. The scenes do run quite long and include mostly uncut footage of the initial pickup, friendly conversation, sexually suggestive talk then, at last, panties are dropped!

A damn solid effort from the Fake Taxi folks brings members a steady stream of new content, about eight scenes every month or two each week! There’s already a strong archive here, too, with more than 400 scenes already available and a network of bonus sites ready to dazzle you with their scandalous wares, everything from more taxicab shenanigans to casting couch romps to something called Fake Hospital!

Cons:
The drivers of Fake Taxi may leave you feeling a little ill-at-ease as they coerce and connive their way inside their female passengers’ mouths, pussies, and even assholes. The language in use can be quite insulting, presumptive, or objectifying. Hey, that’s part of the risqué Fake Hub agenda, sure, but it will definitely turn some folks right off.

The shooting style in use here combines static wide shots with slight fish-eye images pulled from a dash cam and handheld POV footage once things become well and truly friendly between driver and passenger. The POV shooting is rough, raw, and rarely brings viewers good, clean shots of more than a portion of the woman at a given time. Want to see her spread eagled on the back seat, taking dick and staring into the camera? Good luck!

Most Fake Taxi scenes proceed in much the same way, the schedule livened up on occasion by truly bizarre encounters. A pair of latex-masked bank robbers grab a commercial getaway vehicle and end up ass-fucked. A “valentine clown” has he painted face plastered. A three-girl bachelorette party brings the drunken insanity to the back seat. These scenes are glaring exceptions to the standard Fake Taxi premise.

Watching a guy prod a dry finger into a woman’s “shit-pipe” before he calls her some semi-obscure British slang term for “slut” and insists she eats his ass before he finally unleashes his goo can be something of a turn off for some viewers. It’d be great to have more episodes driven by a guy whose way with words are less trashy, more charming, and who isn’t likely to pry open a 19-year-old’s asshole with his opposing big toes - that’s all.