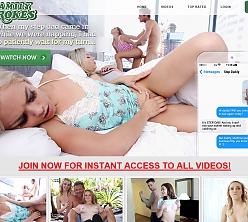 Getting along with your family can be hard, but it's never been as rewarding as it is at Family Strokes, a fairly new entrant in the step-cest niche. Boasting weekly High Definition episodes peeking behind the growing sexual scandals in suburban family homes. A site where step-sons fuck their step-moms, step-daughters suck their step-dads, and an all-in-the-family group session is hardly out of the question, Family Strokes may be new and structurally a bit shaky, but it's also one of the steamiest, most taboo efforts from Team Skeet in ages.

Overview:
Family can be a pretty rough deal for some people. Dealing with violence, neglect, disapproval, and more subtle manipulation and abuse can lead people into a life of depression and misery. Some families, on the other hand, are so genuinely close and compassionate they run the risk of taking their love a little too far. Family Strokes, a bold new taboo-smashing effort from the Team Skeet crew, follows such family situations as they turn from affectionate and platonic to outrageously sexual. Step-brothers returning from college to their step-sister's glee, a Dad trying to motivate his lazy son only to find only his stepsister gets him hot enough to try, and a girl coming home to find her parents fucking, only to lose mom, suck stepdad, and get in a ton of trouble: there are plenty of raunchy step-vest situations online at Family Strokes and, what's more, each one brings viewers High Definition video streams and downloads heavy with crisp colors and detailed imagery, and starring another super-sexy young pornstar du jour. At $24.87-a-month, access to this weird and wild world of pseudo-incestuous debauchery isn't as cheap as, say, your new step-dad's cologne but it's definitely something that, like your step-sister's panty drawer, you won't be able to keep yourself away from. And, look on the bright side: fuck 'em all you want, this family will never bother you for some financial help.

Pros:
Family Strokes offers multi-part narrative movies concentrating on fake family members discreetly fucking each other behind the backs of their spouses or parents. From sis spying her folks fucking, pulling step-dad aside later to marvel at his cock and draining him dry in the kitchen to a brother not content to let his sister remain sexually inexperienced and invites his pal over to tag-team her, Family Strokes is wild, raunchy, taboo fun.

And just who will you be ogling at Family Strokes? Oh, only lascivious young babes like brace-faced Karly Baker, Adria Rae, Alaina Dawson, and Lily Jordan, that's who! Older women join the young girls, young guys, and daddy-aged gents, adding some MILF-mania to proceedings. Alexis Fawx looks amazing in a skintight dress, Danica Dillion irresistible in a negligee, and busty blonde Nina Elle is a commanding presence.

Cons:
Let's face it, not every step-cest scenario plays out in totally creepy, coercive way, but some do. When it's step-siblings, we're good. When it's a stepmother fucking her new step-sons, that's cool too, but when it's grey-haired dads creeping up on his sleeping teenage step-daughter, that's where it gets a little too scandalous.

Without a model index, browsing is a bit rough. Without keyword tags, a search engine, or other basic navigational tools, Family Strokes is borderline unnavigable. The only browsing option is a chronological list of every update with minimal info besides a basic synopsis of activity. The general layout and design of Family Strokes is also lacking personality and style.

Produced by the folks at Team Skeet and part of a wave of new Skeet-operated incest and taboo sites, Family Strokes has nevertheless been excluded from the Team Skeet network. Joining one will not give you access to the other. Nor does Family Strokes membership get you any closer to Sis Loves Me, Daughter Swap, or Dad Crush, each of which can be purchased for $18-apiece.

Conclusion:
Having only been online about a year, Family Strokes hasn't yet amassed a following or a content archive that's as huge as other Team Skeet projects, but it's well on its way to becoming legend among step-cest aficionados. Holding 73 scenes at writing and adding another every week, each bringing both videos and photos to the archive, the former in 1080p HD streams and MP4 downloads, the latter in 1350px frames online and zipped, Family Strokes has a strong base-level bounty on which to expand. No Team Skeet network access leaves members with only this site to enjoy, but thankfully the cast, their performances, and the constructed scenarios make for compelling, racy viewing. Parents often wander into step-sibling-fucking scenes but remain oblivious to what's going on below the belt. Tag-team mother-fucking sessions, panty sniffing, sleep creeps, and various kinds of temptation can be seen here, pushing Family Strokes even further into taboo territory than it already sites, impressing with its bold and adventurous step-cest pornography.