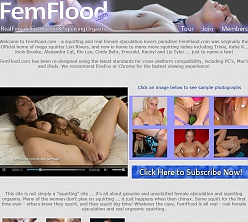 Updates appear to be arriving at Fem Flood on a daily basis, adding more content to the 97 scenes and 30 galleries already online. It's nice to see some solid activity in this regard.

Fem Flood's content archive rotates scenes in and out of availability, with changes made every 180 days. The webmasters claim this is to keep overhead costs low, but with so many affordable server storage options available across the Internet, I can't imagine this is the only reason.

Much like that of its sister sites The Female Orgasm, Hands On Orgasms, and Only Emma, the content you'll see here at Fem Flood is quite visually bland. I know these are amateur productions, but even amateurs can produce attractive, detailed adult videos on a micro budget. The company claims to still be shooting new content and adding it to the archives, but if they are it's indistinguishable from the older material.